Anna said, ‘I realised early on that I was never going to live an authentic and happy life without telling my family who I really was. I’d known for years I was a girl.’ 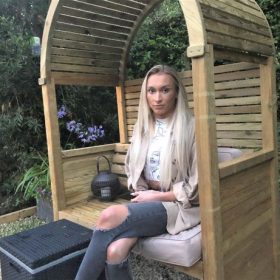 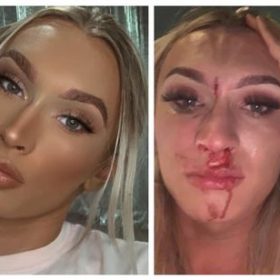 Anna Montgomery knows the anxiety of pretence and shame.

Brought up until puberty as Aaron, a son to Jane and Jonathan, Anna, had known for along time what it felt like live in the wrong body.

Growing up in Newtownards, Co Down, her loving parents assumed they had a gay son, not a straight daughter.

But around six years ago, five vital words changed the world for all of them.

Anna explained: “I knew I’d always have the love and support of my family but actually coming out and telling them they didn’t have a son, that they in fact had a daughter was a daunting prospect.

“Mum for years just thought I was gay and there was no issue at all.

“But the problem was I’m not gay. I’m straight and I like boys but I was born in the wrong body.

Anna says life has had its ups and downs

“This isn’t some fad I conjured up to get attention. It’s very simple, I’m a girl, I’m female, I’m a daughter and a sister to Ross. I just happen to be transgender. My family accepts and understands and now the rest of the world will just have to catch up.”

Anna, 20, has a boyfriend Jamie Girvin, from Belfast, and is currently working in a call centre.

She hopes though, to train in aesthetics and is planning on taking a course in hair extensions.

Appearance is important to her and her desire to appear feminine is mixed with the need to be accepted exactly as she is.

The days of school uniforms are over and thankfully a distant memory.

And today Anna looks like many of her peers with acrylic nails, contoured make-up and her hair styled long with blonde extensions.

She said: “I went to a boys’ school initially and changed to a mixed school and met people I thought of as ‘other girls’. I think most people just assumed I was a gay man. But the assumption wasn’t mine, the fact is people are stereotyped and categorised to suit everyone else.

“The day I told mum I was transgender changed everything. When I think back now those five little words changed our world forever. I just said to her: ‘I’m not Aaron, I’m Anna.’

“It didn’t change her opinion of me. She looked at me for a moment and then hugged me and said it was alright, that everything would be alright. She just didn’t care – she still had the child she loved.

“My mum Jane and dad Jonathan are the most amazing parents and have supported me in everything, through the good times and the bad, through the discussion about transitioning physically to match the inside to the outside, to the discrimination I have suffered and to the future.

“I realised early on that I was never going to live an authentic, genuine and happy life without telling my family who I really was. I’d known for years I was a girl. It’s hard to explain to most people because they probably don’t even think about their gender.

“But just imagine waking up and understanding your truth is different from what the rest of the world assumes.

“They just accepted it because they loved me, the whole of me and they wanted me to be safe and happy.

“Now I’m not stupid and neither are they and we all knew there are prejudices and difficulties that I’d face because I’m a little different to the so-called norm. But we have faced it together.”

Last month Anna faced those difficulties head on while on a date with her boyfriend Jamie.

She was assaulted and left bloodied and bruised after an unprovoked attack in a restaurant in Belfast.

And while she recovered from her injuries, she says the humiliation of being assaulted in front of strangers was harder to bear.

Anna explained: “There’s something about being a victim, a target of someone’s rage and hatred that is very difficult to deal with.

“There have been times when people have been calling me names and I’ve been as bad back. I’ve been my own worst enemy at times and I lashed out in defence.

“But I’m growing up and dealing with a lot and now I literally just try and turn away from the ignorance.

“I’m not sure why people think it’s acceptable to pick on me because I’m a transgender women. What’s it to them? Am I a threat? Do they find me attractive and worry somehow about their own sexuality? Or are they just idiots who pick on people to make themselves feel important? I really don’t know. All I know is that I wish it would stop and that people would leave me alone to live my life honestly.

“On the recent night in Belfast when I was hit, it was nasty but the worst thing I had to deal with was the humiliation. I was embarrassed, I felt foolish and just horrible, and I’d done nothing wrong except sit having dinner with Jamie.

“I wouldn’t have chosen to be transgender, I wouldn’t choose to be born into the wrong body, or have to face changing that body. Who would choose to do that? It’s serious and its scary but it’s a necessity.

“Despite the risks and the pain I am really looking forward to transitioning. I’ve changed my name by deed poll, I am planning breast augmentation and the removal of the slight Adam’s apple that I have.

“And then I’ll need to sort out down below. I am a girl and having what boys have is deeply distressing. It needs to go and I’ll be very glad to never have to see it again.

“I just want to get on with my life. I’d like the five words I said to mum to be as acceptable to everyone else as they were to her.

“It took time for me to understand who I was and what had happened to me but in the end it was all about being honest with myself.

“In a world where we are constantly being told to be authentic, then we should all be authentic and be free to be exactly who we are. So I’d ask people to either accept me or ignore me.

“I’m Anna Montgomery, daughter, sister, girlfriend and friend and I refuse to be ashamed of being who I am, a transgender woman.”