Transgender people are not dangerous, they just need to pee.

The bathroom debate is so much more than where people are allowed to relieve themselves. 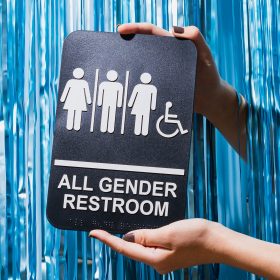 On the first day of his administration, President Biden made headlines when he signed what The Human Rights Campaign (a leading LGBTQ advocacy group) called “The most substantive, wide-ranging LGBTQ Executive Order in U. S. History”. This administration is making a bold move to protect gay and transgender rights and in doing so has rolled back most of President Trump’s anti-transgender legislation. The order furthered the protections for transgender and gender nonconforming (GNC) people to use the bathroom that they associate with their gender, including stipulations specifically protecting transgender and GNC children’s rights while at school. This has had some major backlash and the anti-trans activists have come out in force to argue that this is not just wrong but dangerous to women everywhere who are just trying to use the bathroom or locker room unscathed.

So it seems, yet again, that we as a society have to have this debate, and it’s as ridiculous and bigoted this time as it has been every other time it’s been discussed. This notion that people need to use bathrooms based on what they look like and what genitals they have is not only outdated but problematic and insidious.

The idea of a predator pretending to be transgender in the bathrooms and locker rooms, lurking in the corner to molest the innocent, has been debunked numerous times. It is simply a red herring to perpetuate anti-trans rhetoric. There are no overwhelming police cases to support this myth. There are at least 18 states and over 200 cities that have trans-inclusive laws and protections on the books and there have been no increases in violence in bathrooms in any of those areas. According to an article by CNN,

“Whenever the topic comes up in the news, prosecutors, law enforcement agencies and state human rights commissions have consistently denied that there is any correlation between such policies and a spike in assaults. CNN reached out to 20 law enforcement agencies in states with anti-discrimination policies covering gender identity. None who answered reported any bathroom assaults after the policies took effect.”

Furthermore, domestic abuse agencies and those for the protection of women have called for inclusion in bathroom policies. Hundreds of national, state, and local organizations across the U.S. have gone on record stating that it just isn’t a reality in their experience dealing with women victims of sexual abuse. A coalition under the advocacy group National Task Force to End Sexual and Domestic Violence Against Women has asked for “support of full and equal access for the transgender community.”

This myth does much more harm than people realize. It is an attempt to stigmatize being transgender and GNC. It is a form of erasure where transgender women are not seen as women, and transgender men are not seen as men. It perpetuates the idea that being transgender and GNC is a form of mental illness and therefore potentially dangerous. It is a scare tactic. It is discriminatory and leads to gender policing and targeting of those who don’t conform to gender norms. It is propaganda meant to incite disgust and hatred. To be absolutely clear, transgender and GNC people pose no more or less of a risk of being sexual predators than any other part of the population. If the concern about transgender women is that men will be self-identifying as women to gain access to women’s spaces with an intent to harm, then that concern is actually with predatory men and not transgender women, and the focus should be adjusted accordingly.

And speaking of rapists and pedophiles: Since when do they need permission to enter spaces that are not theirs in order to commit crimes? How exactly does keeping those with penises in the men’s room and those with vaginas in the girl’s room stop predators? It doesn’t. Predators are not deterred by bathroom signs. Laura Palumbo, communications director at the National Sexual Violence Resource Center, told ABC News that “people who are looking to sexually assault someone will go into a bathroom regardless if it corresponds to their gender”.

Going to the bathroom in peace is something that every single cisgender person takes for granted every single day. For many transgender and GNC people, it is a nightmare where they have a choice to either be uncomfortable and risk ridicule and derision at best or be physically abused at worst. There is also the increased risk of kidney or urinary tract infections, or other kidney-related medical issues caused by avoiding restrooms. This is unacceptable. According to Sasha Buchert of Fox News

“In reality, it is transgender people who are at risk of harassment and violence in restrooms and other facilities. In a study from UCLA School of Law’s Williams Institute, nearly 70 percent of transgender people reported having experienced verbal harassment in gender-segregated restrooms, and nearly 10 percent reported having experienced physical assault.”

Many transgender and GNC kids go all day at school without using the bathroom because it’s so uncomfortable for them and they are scared. They skip lunch and don’t drink all day just to avoid it. Can you imagine having to hold your urine for 6 or so hours because you are afraid to use the facilities?

So, the solution to this conundrum is this: we as a society need to readjust our idea of gender to be inclusive, not exclusive. We need to adopt gender-neutral language because if there are no more labels then no one can be hurt by those labels. Gender equality to include transgender and GNC people is not an attempt to erase the binary. Gender is a spectrum. The idea is not to get rid of male and female but rather to open it up to include other identities and have them be just as valid and afforded the same rights.

We need to stop policing each other’s bodies and identities because it puts people at risk. And we need to stop debating about antiquated societal rules when the argument is just simply a vehicle for perpetuating transphobia and hatred. If you look at the issues for what they are, and get past the fear-mongering, you will see real people who just want to pee like everyone else.

Access to bathrooms and safety in them is not a privilege. It is a right for all of us, not just for those who fit nicely into the boy or girl boxes.