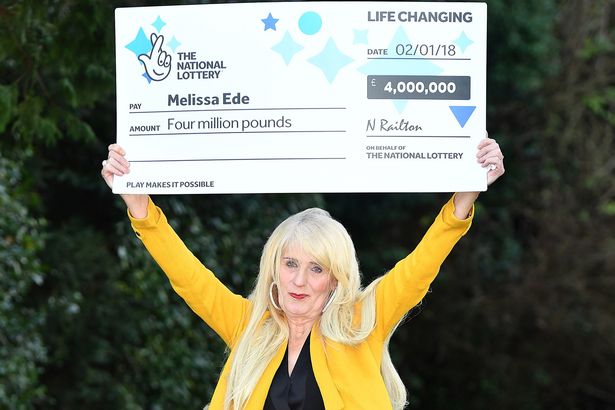 Melissa Ede, 57, says local residents who blocked her move to the upmarket development have “violated” her human rights

Furious Melissa Ede has blamed “nimby” neighbours for shattering her hopes of buying her dream home with her lottery winnings .

The transgender former cabbie fell in love with the five-bedroom property on a luxury development with its own duck pond just days after scooping £4million on a National Lottery scratchcard.

Melissa, 57, says she had agreed to pay £440,000 for the posh pad complete with furniture and was looking forward to moving in with fiancee Rachel Nason, 37, and her five kids within weeks.

But residents on the development in upmarket Cottingham, East Yorks, objected to the sale.

She said: “It was going to be our fairy-tale ending. All I wanted was mine and Rachel’s own little palace, a safe haven.

“All the kids were very excited about having their own bedrooms. It was the happy ending we’d dreamed of. It was stopped for some unknown reason. I feel terribly hurt by this.

“What did I do to deserve this sort of discrimination? Maybe I should still buy it and put a big statue of me in the drive with my middle finger up!”

The letter of refusal following the residents’ meeting

All 10 home owners on the development are directors of Dunswell Park Management Ltd, paying towards grounds maintenance and insurance.

After hearing who was moving in a meeting was held and a vote taken.

They told her in a letter: “The directors of Dunswell Management Ltd have decided to refuse consent to the sale.”

Although they cannot stop her buying the house, Melissa said it left her feeling so “unwanted” and “deeply hurt” that she had no option but to pull out.

Yesterday there were claims that some local residents were so worried about their new neighbour they had offered to buy the house themselves.

One resident has planted around five conifers, creating a shield from the house being sold, though it was unclear if this was directly related to Melissa.

Melissa, who had gender reassignment surgery in 2011 and was formerly known as Les, has become a local celebrity in her home city of Hull after her big windfall.

She also posts bizarre videos online with items such as a bottle of mayonnaise hanging from her chest. In her latest video she used Utterly Butterly instead.

She says she was told the “media attention” surrounding her led to the “rejection”.

But she said: “I’m hardly Kim Kardashian am I?

“We all know what it’s about really – my lifestyle.

“I feel sorry for the poor lady whose house it is. She’s totally innocent in all this. I know she’s gutted about it. It was a cash sale and they had a house ready to move in to. I feel terrible for them.

“This has caused a lot of distress. The house is now back up for sale and I await to see if the next buyer is good enough for their select community.”

Today the couple selling the house refused to comment. But a local resident close to them said: “They are absolutely gutted about this and furious. They think it’s a complete injustice. Legally this management company cannot stop the sale, but they’ve obviously done enough to make her pull out. It’s an absolute farce.”

According to the source the couple had kept the buyer’s identity a secret to protect Melissa’s privacy and thought the consent was a mere formality.

The source said: “They were told permission had been granted, then days later they got another letter saying they’d ‘rescinded’ the letter of consent and were demanding to know the details of the purchaser.

“Next thing this couple know they’d turned it down. They were devastated. It’s left this couple so worried and so upset.”

Melissa has now made an offer on a new property. She said: “I couldn’t live there now anyway because if they are so against me moving in they will watch us all every moment to try and catch us out. It would be extremely uncomfortable. I think they’ve violated my human rights by saying you can’t live in a property.

“We have the right to be who we want and live where we want without prejudice.”

Several neighbours yesterday denied they were discriminating against Melissa. One, who did not wish to be named, said: “Everyone’s opinion is different, but it’s not the discrimination you’re thinking of.

“It’s the stuff on YouTube really, and the attention-seeking.

“This is a very quiet place and this is a person who wants a lot of attention. It’s not about her being transgender at all. We have nothing against transgender.

Her husband said: “It’s to do with privacy and publicity and security. She seems to strive for publicity. I want a peaceful life, don’t want people driving by.”

His wife added: “Most people here are retired. We’ve nothing against her.”

Several other residents said “no comment” while another said: “There was a board meeting and quite a few abstained.”

Another said the vote was “quite even”.