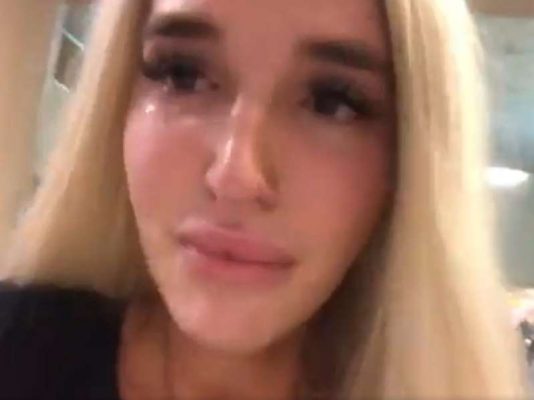 A trans woman has opened up about her horrifying ordeal of being detained at an airport because of her gender identity.

The trans woman – who is called Lilah – posted a video of herself on Twitter where she can be seen walking through an airport in tears.

“It’s so f**ked up that trans people have to literally go through that,” she says in the video.

“I know it’s so f**king dramatic to cry over a f**king airport, but it’s so annoying literally trans people have to go through this and get detained… I just can’t.”

The trans woman was detained while travelling home for thanksgiving.

In a tweet with the video, she added: “Last week I literally got detained at the airport for being transgender while trying to go home to visit my family for thanksgiving.

“I’m sharing this so anyone who has or WILL experience this is not alone.”

Lilah has been met with love and support online since posting the video – but sadly she has also met some detractors who have accused her of exaggerating and lying.

It’s so f**ked up that trans people have to literally go through that.

In a response to one of those tweets, Lilah explained that she was pulled into a room where she was questioned by five different rounds of security guards who also patted her down and scanned her with “X rays and more.” She went through the entire ordeal by herself.

“Tell me when you’re discriminated against or shut the f**k up,” she added.

Many trans people empathised with Lilah over her experience and said that they have had similar experiences with airport security.

The investigation found that five percent of civil rights complaints against the TSA related to the treatment of trans passengers. Trans people make up less than one percent of the US population.

As part of the investigation, a trans woman called Olivia (not her real name) revealed how she felt pressured into showing airport security in Florida her genitals in order to be allowed to fly.

TSA officers are not supposed to let passengers remove their underwear in front of them. But, according to Olivia, none of the TSA officers objected when she removed her pants and underwear to show them her genitals.

Democratic presidential hopeful Elizabeth Warren later condemned the TSA over the investigation, writing on Twitter: “Trans and non-binary people shouldn’t have to face invasive and dehumanising screenings to travel.

“We must do better – and I’ll keep working to ensure that every trans and non-binary American is able to live without fear or discrimination.”