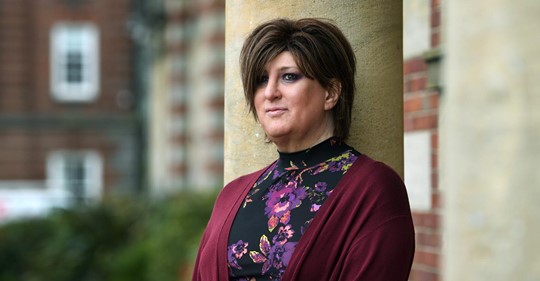 Claire Birkenshaw, who transitioned whilst in post as a headteacher. Copyright: jpimedia

Claire Birkenshaw became the first transgender headteacher to transition while in post in the UK. She tells Laura Reid about her experiences ahead of a talk in Hull.

Claire Birkenshaw thumbs through a stash of student thank-you cards in her office at Leeds Beckett University and settles on one to read aloud. “Thank you for all the support you have given me,” it says. “I appreciate the hard work you have put in for us all. Continue being the best, happiest and funniest teacher you are.”

It’s a touching expression of gratitude that would leave any educationalist feeling valued and proud. And for Claire it goes even further. “That was such a kind thing to say about how you are received by students and what they think,” she says. “The students have been amazing.”

Meet the Yorkshire non-binary gender community fighting back against a rising tide of stigma and hate In 2015, Claire made history by becoming the first transgender headteacher to transition in post, in the UK, while working at a school in Hull.

“It was nerve-wracking,” she reflects of the first time she walked into the classroom as a woman. “I was utterly petrified…I was also petrified when I came to work here as well. You still anticipate how people will interact with you, what students will think, a whole host of different things.”

From early childhood, Claire felt a sense of gender dysphoria. “I can’t explain it or describe how it happened. I needed to express myself as Claire, although I didn’t call myself Claire at the time. I also recognised that this would cause issues and conflict in people and would be seen somehow as problematic or wrong.”

In 1979, when her mother asked if she wanted to watch the A Change of Sex documentary, following the transition of trans woman Julia Grant, Claire took it as a sign.

“I thought Mum was reaching out because she knew. But at the time I was too ashamed and too embarrassed. I didn’t want to reveal anything and say, ‘This is me and this is how I feel’ because I was afraid of what would happen next.

“Would the conversation have resulted in the fact this was ‘nonsense’ or ‘a phase’ and I’d grow out of it? And also, what would it mean in terms of going to school? If this got out, how would I be treated?”

It would be another four years before Claire first raised her feelings, opening up to a friend when she was 15. She hoped it would “go away”, that she could control or suppress it. “It just doesn’t,” she says. “I felt the person I was talking to would understand and that they would be okay. I just needed to share it.

“Whenever you say it out loud, there is relief to an extent,” she continues, “because you’re saying, ‘Look, this is me, this is who I am’. But you always anticipate you will be rejected and always anticipate that once people have that information they will use it against you. There’s always that fear, because you see what society’s like. You see how people can be hurtful to one another.”

The gender change journey of North Yorkshire Police call handler For years, Claire stayed silent, fearing that life as Claire was an impossibility, that she would have been rejected by society. The internal conflict was huge.

“It caused ridiculous amounts of inner turmoil. It was horrible. But if I say those things, it feels like I’m being negative to the people in my life. I’m not meaning to be negative. I feel sad that I wasn’t able to say, ‘This is who I am’.”

Work helped her to cope, a welcome distraction. After studying a PGCE at Hull University, she had become a secondary school humanities teacher in the city, later becoming a principal. “Teaching is incredibly immersive,” she says. “For me, it occupied everything.”

And so, in 2015, Claire made the decision that she would transition and live her life as a woman. That meant coming out to colleagues, students, friends and family. And it also meant opening up to her parents.

“I think you just anticipate rejection – from everyone. It seems everyone has an opinion. Some of the conversations that were had with me was that it would be like a grieving process for other people, almost as if they had lost something.

“There’s a burden there, that you feel that you are causing harm for others. Some people might not want a relationship with Claire. You go through stages of who you’re going to inform. Part of it is trying to identify who you think will be accepting. It’s incredibly isolating. It’s very lonely.”

As a headteacher, Claire felt a sense of duty – a duty not to shy away, a duty to give visibility for trans people among youngsters, teachers and the wider community. For many, she was the first openly trans person they had met.

She will never forget the smile and ‘Good morning, Miss’ from one of her students on her first day in school as a woman. “The student pulled me to one side and said, ‘We have a trans in our family as well’. And that’s exactly it.

“Learning is not only a human right but it is essential for being human and belonging,” she says, ahead of her appearance in Hull. “Not only should our curriculum, resources and physical space reflect that but our behaviour too. Every opportunity should be used to promote understanding, tackle prejudice and foster good relations.”