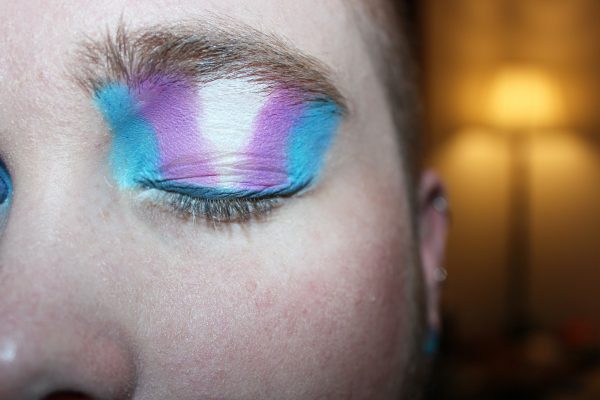 The Date That Changed My Life

I went on a date with a trans woman and it forever shaped my outlook on life.

June. was. #$*%ing. gorgeous. She had a smirky smile that told me the feelings were (more than likely) mutual. So, in my signature pick-up style, I left the bar without a date attempt — and then realized I made a terrible mistake a block away.

I paused, frantically checked my pockets for something to write my number on, and found only cash. It was only a buck. So I returned to the bar with the first ridiculous plan that popped into my quasi-sober head: bill + number = hope.

Except the bar was crowded, and June was four layers deep. Her friend Lauren wasn’t. So when Lauren and I made eye contact, I gestured, smiled, shoved a dollar bill in her jeans, shrugged, and then ran back out of the bar. Leap of faith.

In retrospect, wedging money into a (surrogate) woman’s pants is most likely not an acceptable pick-up approach.

I divorced from my wife eight months ago, and I haven’t even tried to date since. My days have been consumed with rebuilding my life, nesting a new apartment, and hitting deadlines in the midst of being a single father to a remarkable son. My dollar bill wasn’t just a courtship bid, it was the start of the next chapter of my life. When June wrote back, I screeched. I forgot that intoxicating feeling of affirmation that comes from a social trust fall. We had great text banter, and I was unabashedly charmed. She had labeled me in her phone as “Dollar Bill Guy” and she confirmed that it was certainly a left-of-center pick-up approach.

In our initial texts, June clarified that she tends to date women (“It’s just…better”). I joked back and said that was great because I had always felt like a “lesbian trapped in a man’s body” — a line I’ve been using for well over a decade, to fairly effective comedic ends. I was expecting an LOL, or at least an lol.

Instead, she immediately asked what I meant by that, without a hint of irony.

I explained that as an artist who went to an all-male, Catholic high school, I always felt out of place during my formative years. Art school affirmed my pariah status: I have fewer of the visible bro signatures that typically identify the quintessential American male. Virtually all of my friends these days are women, or gay men. I’ve traditionally had a hard time connecting socially with men, with tiny exceptions throughout my life. The lesbian line might have been an un-PC joke, but it wasn’t without thought.

“I’m assuming you hadn’t realized I’m trans”, she thumbed back.

It certainly wasn’t the retort I was expecting.

I consider myself an ally, although I know I fail daily in countless ways to advocate from my position of white-cis-male-hetero-power. (Operative word: consider.) Living in NYC, I’ve had a fair number of transgender people in my life: coworkers, friends of friends, former students. But I’ve never been unabashedly attracted to the possibility of a partner who is trans — I went into a bit of a tailspin.

My cognitive dissonance was in full force, my body and brain unmistakably attracted to June, and my repressed queerphobia revolting with a condemning “this makes you gay.” (I know.) But I couldn’t deny my excitement for a date with June. And I also couldn’t deny that my neurotic and overactive brain has some dark alleys.

Before I even had a scheduled a first date with June, I had already played out my Irish Catholic father disowning me, my extended family banishing me, and even the potential of my son being bullied because of his father’s partner. Apparently more dark alleys than a John Carpenter film. It was so hard for white-cis-hetero me to not make this about, well, me, when the reality of June’s trans-ness isn’t my thing at all. And so I dismissed it all, and I decided to adhere to the wisdom of Anthony de Mello, one of my favorite thinkers: “Peace is only found in ‘yes’.”

Tuesday night, 9pm. Our date was among my more enjoyable first dates: well-balanced medium talk, impassioned discussions on Trump and Obama’s shortcomings, the corporate takeover of the Pride Parade, the reason why Red Bull and coffee generate different kinds of buzz. My attraction to June was stronger than ever. She was glorious in every way. And she oozed the single most intoxicating aphrodisiac out there: confidence.

Here I am, squeezing the plump of my new dad bod like a nervous tic each time I’m in a bathroom, depressed that my hair decided to quit on me, wearing both the scarlet letter of a failed marriage and the tight new jeans of a man desperately trying to feel wanted again. And there’s June across from me, leaning into the gale-force winds that is life under the shadow of Trump’s ‘murica, saying a hearty yes to her authentic self, to her journey, to her passions and her people. Being joyful through it all.

Leading up to our date, I forwarded June a photo of a new billboard that popped up in Detroit proclaiming “Trans People Are Sacred.”

She texted back, “we ARE sacred. I literally had a beard six years ago, if this ain’t holy idk what is”

I agree — especially after our date — that trans people are sacred, but not because of facial hair. That ominous Catholic education lords permanently over my superego, but I’m comforted by Karl Rahner, a German theologian who reasoned that because God inhabited a human body in Jesus, anything that makes us more authentically human makes us more divine. Sooome of that Jesus stuff is worth keeping.

Look, I’m working with the smallest of sample sizes, but it’s exceedingly rare to meet anyone capable of living so authentically, to be so honest, open, and what seems to be in a disproportionate state of vulnerability than most people I know; June made Brené Brown proud. And so, yes, June — and all of your trans family — if you “ain’t holy idk what is” either. Anyone committed to being their true self, especially in the midst of gnashing violence and vitriol is demanding of the highest praise and respect. And protection.

There’s no June Part 2. Not a chance. She didn’t seem that interested, and we’re in completely different chapters of our lives: she’s out getting high and frolicking on nude beaches while I’m singing Five Little Monkeys to my son. But she generously offered me so many gifts that night: laughter, perspective, grace, compassion, and the wisdom to now know that in 2019, that lesbian joke fit me as well as those new jeans fit this new dad bod. And our two hours of conversation will ripple across my consciousness for a very long time — perhaps forever.

A few weeks after I saw June, I brought my son on a short vacation. His hair is finally growing in (after a ten-month hiatus) with an aggressive curl. Consequently, I spent the better part of my holiday correcting the coos of strangers flattering my “beautiful girl”. I regretfully snapped on one admirer. “Come on, he’s even wearing blue.” I regretted the words from my pointed tongue almost immediately.

I used to take pride in dramatically announcing to my conservative father that “colors have no gender” on my trips home from art school, feeling even more enlightened than my peers who relished their “real men were pink” clichés. And here I am, almost 20 years later, enamored with June while vomiting out my toxic Y chromosomes to a total stranger. Yesterday at his doctor, my son picked a princess sticker on the way out. Today, he gleefully retrieved an abandoned Barbie from the playground, and waved it like a pride flag. I felt my chest involuntarily tighten each time. And then I put him to sleep, logged onto Instagram, and saw June’s ebullience on full display. And I thought to myself, “I still have so much work to do.”

Author’s Note: I wrote this in August of 2019, but I felt compelled to share it now in its original form. I’ve changed June’s name to respect her privacy, and shared this reflection with her prior to publishing to ensure her consent. I’m sure there are lots of things wrong in there; I pre-emptively apologize. I’m on a journey, and trying to improve. Please do reach out if I have used any inappropriate labelling or language.