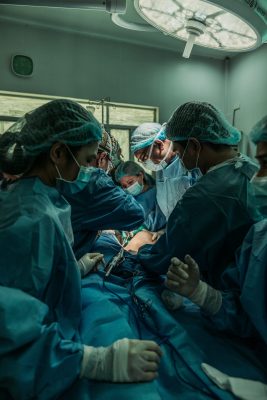 Photo by JC Gellidon on Unsplash

I recently met with the surgeon who will be performing my gender reassignment surgery (GRS) to go over procedures and recovery matters among other concerns. We set a date and the matter was suddenly done. Just like that. I don’t know what I expected at the end of the long debate I’ve had with myself, a blaring of trumpets, the clouds parting to reveal a brilliant light, but it was very similar to my experience of starting hormone replacement therapy (HRT). I talked with my physician at length, she took down my medical history, examined me, took blood samples and prescribed the medications. Just like that. Again my feeling afterwards were elated but really not by much. It was the beginning of a long process.

I do not mean to imply that the manner in which I was given the opportunity for surgery and hormones was in any way glib or without caution. Both providers carefully screened me for my intentions and expectations, knew my history of gender dysphoria as much as they could in a short interview, realized I was a mature adult fully capable of making my own decisions, and that I had arrived at them after long and serious consideration as to the risks and benefits.

Hormones and surgery as I see them for myself are a means of confirming what I already know about myself: that I am a transwoman. Without these procedures I would still be one regardless. With them I will more greatly affirm who and what I am. It’s fairly simple to understand, not that I came to these decisions with any ease but rather after long struggles with the implications they would have. What others need to understand is the logic behind the decision trans people make to come to their decisions, whatever those decisions may be.

The process of coming out to family and others involves great patience. Things must be explained over and again ad nauseum. There were three stages to mine:

It got real for me in two ways: I had taken a step further into my journey with greater commitment than ever before; and I realized this decision was not about what anyone thought. It was mine and mine alone. It cemented and hardened something within me. I was no longer on shaky ground. I wasn’t living at the pleasure of others anymore. I knew who and what I was. I needed no one’s approval. I was unmoved by anyone’s discomfort with me.

This reality I find myself in requires its own logic. It provides its own framework and this is vital and important for understanding transitioning. The pathologizing frameworks of medicine, psychology, the World Professional Association for Transgender Health (WPATH), and the Diagnostic and Statistical Manual of Mental Disorders (DSM), will not provide us with this logic and the knowledge it enables. In fact, they will often do the opposite and lead us away from our inner logic to endlessly questioning our motives. We are our own evidence. But we have much to learn.

When I began HRT, I asked a lot of questions and did a lot of research. The only available medical evidence of the effects of HRT on women my age was from studies done exclusively on ciswomen and I was prescribed my meds accordingly. This is just how things are. It doesn’t serve me well that the decisions about my medical health are made based in studies on bodies and biology dissimilar to my own. Furthermore, I have little or no say in the matter. No one is willing to go beyond the guidelines set by the medical establishment and I am unwilling to take matters into my own hands and self-prescribe.

There isn’t a roadmap for any of this. We’re feeling our way through it and I am not ungrateful for the medical providers who care for me. As I said, this takes great patience and we are still at the ground floor of understanding transitioning. It is not a perfected science.

But transitioning involves far more than medical science. The social sciences — cultural, psychological and political — also need to be more informed by this logic of gender transitioning because it defies our prior notions about the stability of gender. These areas of study are still largely if not exclusively informed by gender binary politics. Transitioning affects nearly every discourse that is created around a gender binary. This is a genie you can’t put back in its lamp.

I find it as though I’m living in a constant state of gaslighting where I have to defend myself from people and entities whose sole aim is to prove me insane and incapable of making my own rational decisions. I’m made to feel like a wayward child in a room full of disapproving adults.

During my career as a writer for a design engineering company, my first boss was someone who found pleasure in alienating people beneath him in the corporation hierarchy to the point of irrelevance. You would find yourself sidelined on important projects, humiliated at meetings, ridiculed in your work, infantilized. Years later I came to realize this man’s sadistic intent and his need to find pleasure in his power to destroy lives and ruin a person’s confidence in their abilities.

It is the same in the lives of transgender people and the machinery we are manipulated by. The power people find there as a realm in which they can exercise it justifies their own moral logic and through this twisting of reason cancels out mine. I have no say in what I want to do with my own body.

We may have been downgraded in the DSM from a disorder to dysphoria but we are still rendered incompetent in our ability to take our healthcare into our own hands and make decisions for ourselves, to find all the consent we need in our consciences.

This is not like the fight over abortion rights except insofar that abortion advocates insist on the autonomy a woman has over her own body which is inarguable. The right to transition without jumping through hoops is a struggle for us to win our autonomy over our own bodies with good, available, and attentive medical care.

We cannot receive the care we need unless we submit to the demands of the DSM and WPATH and so we go through the motions of therapy whether we need it or not and apply for medicalization as a disability while at the same time trying to normalize our lives and ourselves and consider ourselves rational and fully capable of making rational decisions as a people without a disorder. Catch-22.

Although the WPATH guidelines are stated to be “flexible” in application by health care providers, my experience shows me a reluctance on the part of providers to stray from them. Rather they have become the standard, as the title to their document is evidence, by which our bodies are governed.

Don’t get me wrong: I am in full favor of having these standards of care as a living document and as a guide to professionals it is essential. My objection comes with the roadblocks professionals put in place when this becomes the only way for my medical operation to proceed.

Why does one need to wait a year of living as their perceived gender? Haven’t we been doing that our whole lives? And how is that documented? A year’s worth of therapy with letters from a therapist attesting to a clinical diagnosis of the subject’s gender dysphoria and another letter from a psychiatrist, just to make things official. A year on HRT. Why a year? It all strikes me as rather arbitrary.

Here is the list of requirements I was presented with that I must have in hand prior to surgery and based on WPATH recommendations:

Name and address of the surgeon
Name and date of birth of the patient
Who is writing the letter and the relationship to the patient (i.e., I am a licensed clinical social worker/psychologist, etc. and saw person for this diagnosis and for this amount of time, dates should be very specific)
History of person’s gender dysphoria and treatment (psychotherapy, hormones, other surgeries) the patient has had
Specific length of time on hormones including dates, must be more than one year
Any history of mental illness or substance abuse
Current medical or mental health problems, current medications and stability of these conditions
Capacity for informed consent and patient’s understanding of risks/benefits of planned surgery
Fertility discussion
Psychosocial stability (housing, support, plan for post op period)
A statement that the patient meets the criteria for surgery

There are many problems with this, not the least of which is patient confidentiality which goes out the window with this essentially public statement about my life. Whose hands does this information end up in? Any deviation or disapproval by whoever is reviewing and I can be refused surgery. These are (some of them anyway) real concerns but they can be easily handled within the intimacy of a patient/physician relationship.

The process subverts my autonomy and authority over my own body. The path of reasoning that brought me to this place as an informed adult has its own logic. It may or may not comport with yours but it has been arrived at through a process of careful consideration and debate, as any system of logic must. The power to make these decisions and have them executed should be my own. My ability to live a happy and fulfilled life, if not my very survival, depends on it.