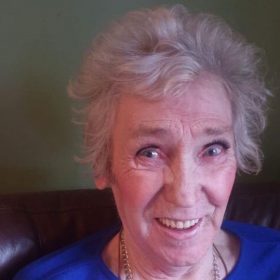 Wilma McGilvray passed away in Glasgow Royal Infirmary last Friday- the same hospital where she received groundbreaking surgery in 1974.

Tributes have been paid to a Scots Trans ‘pioneer’ who is believed to be the first person in Scotland to have had gender reassignment surgery.

Born in Glasgow as William in May 1941, she had to battle to be accepted by society and for medics to carry out the procedures she wanted.

After decades of struggling – and in a first for Scotland – she went under the knife in November 1974 and was given full gender reassignment surgery.

Best friend Dionne Simpson, who is also Trans, knew Wilma from age 14 and the pair shared the journey together and spoke of their heartbreaking final conversation.

She said: “She was a pioneer in the Trans community in Scotland because she was the first allowed to have surgery.

“It was 1974 she had her sex change surgery at the Glasgow Royal Hospital which is where she also died some days ago.

“I don’t think she knew she was dying because I spoke to her the night before she died and I just said ‘Wilma take whatever treatment they’re going to offer you and hopefully we’ll have another couple of years with you.’

“Her last words were what we always said to each other ‘love you Wilma’ and she said ‘love you Dionne’ and that was it.

Dionne now lives in London but was born in Maybole, Ayrshire, and said she had to travel south of the border for her procedures which she had ahead of Wilma in 1968.

“Wilma and I met at the Balero cafe just off Hope Street, she had already started taking the hormones and I was with some other friends there.

“They knew I was going on the same journey as Wilma.

“I thought it was amazing. She was an inspiration for me.

“I was the youngest Trans woman in the whole of Britain having my surgery in London at the age of 18 after Scotland even refused to consider giving me surgery.

“Wilma had to fight a battle to get her surgery in her native Scotland which is what she wanted.

“I said ‘if you’d come to England with me you would have got it’ because back then the Church of Scotland was against her operation.

Wilma was a waste collector for Glasgow council and she had to struggle for a decade before her surgery could happen.

Dionne said: “I first met her when I was 14 and still living in Scotland, in a town called Maybole which back then was very small and everybody knew everybody’s business.

“I know my dad had a hard time in the town after I went public.

“She was an amazing person.

“Wilma started off working for Glasgow corporation emptying the bins.

“But after that I don’t think she worked, she had a really hard time.

“When people used to meet me they would think I was a girl just wearing boys clothing… sadly it wasn’t the case for Wilma.

“It was terrible for her. She was sent from doctor to doctor.

“But she never gave up and I hope that I gave her some courage to go on.

“When I had my surgery done I couldn’t wait to get up to Glasgow to show her and say ‘look at your sister now’.

“She was astonished- and said ‘I am so proud of you’.

“I went with Wilma when she was going to tell her mother about the surgery she was planning, they lived in Blackhill.

“Her mother met me and said I looked very pretty so I said that Wilma would be too and I think that encouraged her mum.

“Her mum accepted her, her dad was a quiet man and it took him a bit longer- which I think is often the way with me because they are losing a son to become a daughter.”

After her surgery she was also given breast implants and hormone therapy to complete her transformation.

But one unexpected figure at her bedside as she awoke was 60s pop icon Cilla Black- who had read about Wilma’s journey in the papers.

Dionne said: “At the time Wilma had a partner… who told the papers about her surgery and didn’t even tell her as she was lying there recovering in hospital.

“Cilla Black walked in and held her hand and said ‘I read all about your story’ and Wilma said ‘I didn’t even know I had a story’.

“Wilma said she couldn’t believe it to look up and see Cilla Black there.

“She held her hand and said ‘I think you’re fab and such a courageous woman for doing what you’ve done.

“She was really made up.”

Dionne has been something of a celebrity- appearing on Britain’s Got Talent, under the stage name Valentina Ventura, and at one stage sharing a dressing room with Sir Paul McCartney during her years as a go-go dancer.

But Wilma had a quieter life and had barely ventured out of Scotland.

A committed Roman Catholic she had always wanted to visit the holy shrines at Lourdes in the south of France.

Dionne made sure it happened and helped her get her first passport- which she said her long term pal ‘felt like a billion dollars’ when she noted the document was female.

She said: “She had hoped to go to Lourdes last year and she’d never had a passport, she’d never left Scotland apart from Manchester.

“We got her gender recognition certificate in 2019 and then her passport.

“She finally got female on her birth certificate and her passport- it made her feel a billion dollars.

“She always wanted to go to Lourdes, she was always a good Catholic, so I pushed her and she done it.

“She was pushed by the LGBT community in Glasgow who helped her.

“They really did support her.”

Wilma told the Scottish Sun in 2015 about her struggles growing up in the tough world of 40s and 50s Glasgow.

She said: “Wilma said: “Growing up was very difficult.

“I knew very early there was something ‘different’ about me. I knew from the age of eight.

“I had three brothers and I just was not like them.

“As a child I didn’t talk about it but when I got older I knew that I wanted to be a woman.

“The medics told me that I should dress as a woman for two years to get used to it.

“But I had been dressing as a woman for ages before that.

“I was a stunner — very glamorous. But I faced a real struggle to get this operation.

“I had to battle to find a surgeon who could do it. It took me 10 long years.”

A private funeral service is to be held soon.