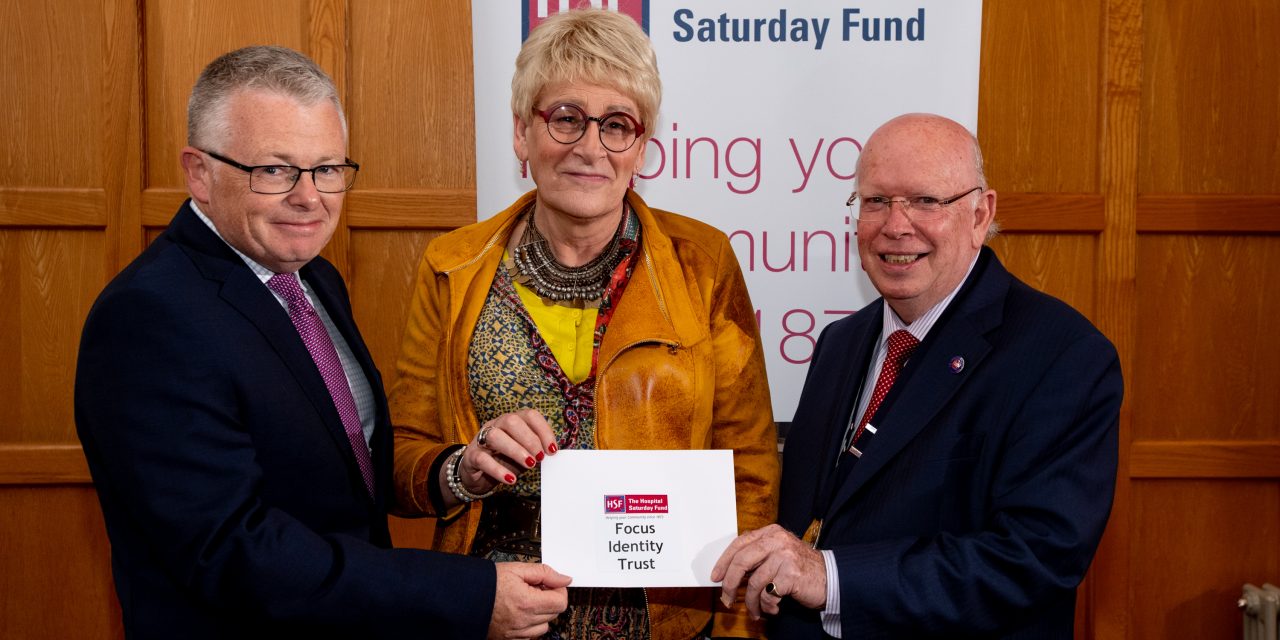 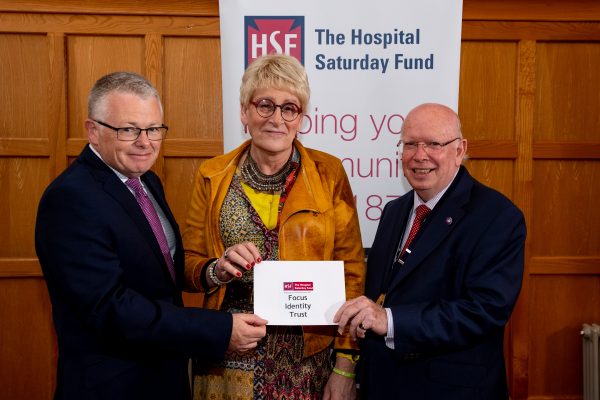 We at Focus: The Identity Trust were delighted to join The Hospital Saturday Fund at their recent charity reception at Queen’s University. Our Frances Shiels received our  award on our behalf to continue to provide support to transgender individuals and their families in this part of the world.Twelve Northern Ireland charities received donations from The Hospital Saturday Fund (HSF) at a special reception hosted at Queen’s University Belfast on 4 September 2019. In total, £65,000 was donated to the charities at the event, which was held in partnership with the Community Foundation for Northern Ireland (CFNI) and Macmillan Cancer Support.

Four grants were made by HSF in conjunction with CFNI, a new initiative between the two organisations that sees delivery of the latest round of the Community Innovators Programme, run by CFNI and their partner Work West, which was focusing on health and wellbeing challenges.

Four charities were successful through the Seed Fund round, among which were IncredABLE aiming to design an innovative drop-in space for people with learning disabilities and/or autism using a double-decker bus; Mid & East Antrim Agewell Partnership aiming to explore and identify new solutions to the challenge of supporting vulnerable older people; South Eastern Regional College aiming to explore and develop a new cross-college approach to addressing the challenge of supporting students with complex social and health related problems; and Women’s Aid Armagh Down aiming to explore and develop new approaches to connecting and engaging with hard to reach service users.

The evening also saw the launch of the exciting new fundraising partnership between Macmillan Cancer Support, the UK’s leading source of cancer support, and The Hospital Saturday Fund who are joining forces to support more people with cancer and other critical health conditions across Northern Ireland. This unique initiative takes place between two organisations who have a rich and long history of supporting those with critical health needs and this partnership has ambitious fundraising plans to help even more people across Northern Ireland.

Paul Jackson, Chief Executive of The Hospital Saturday Fund said: “We are delighted to continue the tradition of supporting many wide-ranging charities in Northern Ireland, many of which are less well-known. The Hospital Saturday Fund is honoured to support the efforts of such deserving charities and help in some way towards the exceptional, tireless work that they do in making such a huge and positive difference to people’s lives. We are very pleased to be working with the Community Foundation of Northern Ireland on this project and hope it is the start of a very fruitful relationship in which we can support many more charities in Northern Ireland.

“We are also excited to launch our new fundraising partnership with Macmillan Cancer Support, with whom we have a long history. This partnership will go a long way to support those living with cancer and other critical health conditions in Northern Ireland and we are very pleased to be working with Macmillan on this initiative.

In 2019 the Hospital Saturday Fund will give £1.5 million in donations and grants to medical charities for care and research, hospices and hospitals across the UK and Ireland. Assistance will also be given to individuals whose illness or disability has caused financial difficulties.