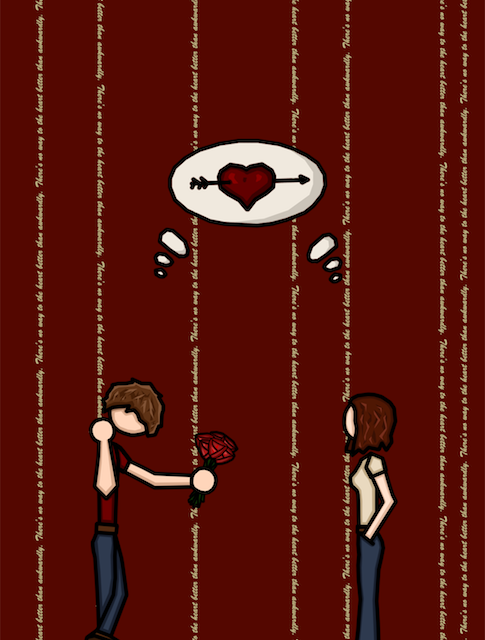 I met my wife at the beginning of college. We were both part of the incoming class of 2009 at Gustavus Adolphus College in Saint Peter, Minnesota. It was late summer. The heat was inescapable.

Having grown up in the suburbs of Denver, Colorado, I had become accustomed to a certain sort of heat. The heat in Colorado was almost always the sort of dry heat where you turn a fan on, sit in the shade, and things mostly resolve themselves. I had been trying that strategy in my fourth floor brick and concrete dorm room for a few days, and it wasn’t working.

As it so happens, I was using a similar strategy regarding what I thought of as my inescapable desire to be a girl. I told myself I’d go to college, make friends, have sex, and things would mostly resolve themselves. I had only been trying the strategy for a few days, but it was working.

Everything was so new, and I was so busy that it was hard to get too wrapped up in what I had come to believe was simply a burden I would always have to bear. After all, that’s what allowed me to escape back into the closet after coming out to my mom at seventeen. It wouldn’t last.

But the heat, that was inescapable. I spent those first few nights before classes started sweating on top of my sheets, mopping sweat off my face, complaining about the heat to others etc.

When I went off to college I had a lot of complaints.

My college admissions essay was basically one long complaint. In it, I railed against people that never lived their lives, never challenged themselves, never pushed themselves, and never tried to find their own happiness. I believed that almost every adult I knew had settled for a sort of half-life. A life where the expectations of others and society added up until they were trapped in the suburbs with spouses they hated. Their trips to big box stores with overflowing shelves were then meant to serve as a counterpoint to their empty hearts and minds. I thought they were all phonies. I wasn’t going to be a phony.

Reader, I was Holden fucking Caulfield.

When I met my future wife at lunch one day, I didn’t notice her. I was too wrapped up in acting out this process of defining myself in opposition to “the man” — and the negation of the woman I was — to notice her.

Luckily, Laura noticed me because I was wearing a Straylight Run t-shirt. Straylight Run was an emo band I liked. Hell, I still like them. As it turned out, Laura liked Straylight Run too, and thought I might be worth talking to. That I was wearing that shirt on that day, and that it caught Laura’s attention is a bright spot of serendipity in my rather unlucky existence. I still have the shirt sitting in a box somewhere. Best. Shirt. Ever.

Anyway, after I failed to notice her and continued going about my day trying to be cool and stick it to the man, she messaged me on Facebook. Facebook was new and exciting back then, and not a terrifying all-knowing consumer surveillance tool. She asked me if I wanted to go on a walk in the arboretum sometime. I said yes, and then promptly tried to figure out who she was, and how she knew who I was.

A day later I met her outside her dorm. My hair was short and spiked in the front. I had a button up shirt from American Eagle on, and some cargo shorts to match. I was wearing what I now think of as a “bro” necklace. You know the kind — with the tan and brown “natural” beads etc. Topping it all off I had just applied a liberal coating of Axe body spray. I was everything I thought an 18 year old male college student was supposed to be. You would be forgiven, had you seen me that night, for thinking I was a guy.

would be forgiven, had you seen me that night, for thinking I was a guy.

Laura walked out of her dorm with a tan newsboy cap perched on top of her shoulder-length brown hair. She had a band t-shirt and corduroys on, along with a pair of faded Chuck Taylors. You would be forgiven, had you seen her that night, for thinking she was out of my league.

As we walked through the arboretum, she talked about somewhat ironically and somewhat seriously watching the reality show R U the Girl with T-Boz and Chilli. Over the next half an hour, I heard all about the antics of T-Boz and Chilli and the girls that were competing to be “part of” TLC. I thought Laura was weird. Meanwhile, I talked to her about Scrubs, and the Hitchhiker’s Guide to the Galaxy. She thought I was weird.

By the end of our walk in the arboretum, we were assured of our mutual weirdness, but we weren’t ready to stop talking. So, we started walking around campus. Eventually, we stopped and sat on a bench to talk. Three hours later, well after the sun had set, we knew more about each other than anyone else on campus. She did not know that I had a girl crush on her, though I can’t say I did either.

A couple weeks later, after hanging out a few more times, I asked if I could kiss her. She said yes, but only on the cheek. A couple days later, I asked again and got a “real” kiss. A couple weeks after that, on October 1st, 2005, an annoyingly direct suite-mate of hers asked if we were dating and after a quick side conversation, we reluctantly admitted we were officially together.

We were both painfully aware that romantic relationships when you’re 18 are highly unlikely to survive. People change, after all, and neither of us knew what we’d be doing once we left Gustavus. So we knew that the chances were pretty high that our relationship wouldn’t last long enough for us to have that conversation. But, we kept hanging out together, and we kept talking. Talking is what we did best.

Over the following years, long, honest conversations covering all sorts of topics became the hallmark of our relationship.

I like to say that the night we walked in the arboretum at Gustavus Adolphus College we started a conversation that we’ve never quite finished.

By spring, we said we loved each other. At that point, our conversations had already covered topics that many couples take years to get to. They had even grown to include occasional discussions about gender and sexuality.

As a result, by the end of the year Laura would have been able to articulate, if asked, that I wasn’t happy being a “man” and that I sometimes wished I had been assigned female at birth (though that terminology was years away still). Laura also would have been able to tell you that I was jealous of women and that I thought of myself as a sort of pervert — because I was both attracted to women, and wanted to be one myself.

In less than a year of knowing me, she knew that I didn’t like being categorized as a “boy” or “man.” However, she did not know I was trans. How could she know something I refused outside of my darkest moments to admit to myself?

For my part, at the end of that first year I would have been able to tell you that Laura was not 100% heterosexual. This fact was somehow very pleasing to me. It was comforting in a strange way that I couldn’t quite put

my finger on. Part of me even wished she was gay. I wonder why.

Our conversations about gender occurred regularly, about every six months or so, generally corresponding with my more dysphoric phases. Looking back, they were a sort of pressure release that let me express some of my feelings while denying others.

I always approached these conversations furtively. I was aware that at any moment, I might say something that would turn the woman I loved into the woman who wanted nothing to do with me. Even still, I was always honest — not necessarily with myself, but certainly with her. I typically approached my more direct statements with reference to the idea that I couldn’t understand what it would be like to be trans — it was hard enough being a guy who didn’t feel like he fit in, after all.

I wasn’t a trans woman. No sir. I was just this poor chap who had always wished he was female, hated being thought of as a “man,” and who would have gladly traded his maleness for femaleness if it was possible. Not trans. Nope.

This was not a lie, and it was not deception. I honestly believed I was not trans, and I did not hide my feelings about my sex and gender. I couldn’t. I felt a compulsive need to share them with Laura. I understood, on some level, that my desire to be a woman was a big fucking deal, and she needed to know about it — and so she did, inasmuch as I did.