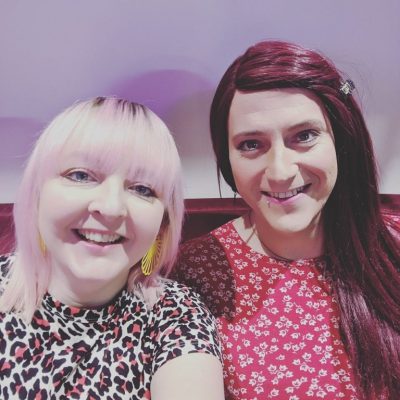 My Husband became my Wife and made me love her more

I met Zoey in a pub in Cardiff in 2007. I was definitely not looking for commitment after previously being hurt, but she intrigued me and after a few months of being on again, off again, I knew that she was a special soul. From day one she showed me love and kindness like I’d never experienced before. At this point, Zoey presented as male – and would do for another 10 years. I would find out later that it was not an identification she connected with, and only now do I understand that she has spent her entire life dealing with inner conflict, in her heart, body and mind. We were married and expecting our first child after just 18 months together. Some friends and family thought we were rushing and that our relationship wouldn’t last, but marrying Zoey was the greatest day of my life and here we both are, over 11 years later.

I found out that she wanted to transition on the cusp of 2019. I think I must have known all along because I was the one to ask her. I’d always referred to Zoey as a ‘woman in a man’s body’; she had qualities I had never seen in a ‘guy’ before, like being particularly sensitive and understanding. Still, it was a shock to hear her say the words, and my reaction was pretty honest and raw. I remember turning to her with tears in my eyes and saying, ‘I don’t know if I can do all this’. It’s human nature to react and question, especially when something is very new, but even as the words came out I felt angry at myself for having doubts. Zoey asked me, ‘Shall I get changed back into my old clothes?’ In that moment, I knew I couldn’t stand in the way of who she was born to be.

In the following weeks we spent a lot of time together, laughing and talking – all I wanted to do was hold her close and tell her everything was going to be okay. I also cried a lot, sad that she hadn’t felt able to tell me sooner, but at least I could now support her through her transition. She never got angry when I was upset, or called me selfish when I thought about ‘me’. In fact she constantly reminded me that any feelings I had about her transition were valid. That was incredibly beautiful. As a couple, romance wasn’t really on the cards at that stage, although it wasn’t long before that side of things started up again. What developed between us went deeper than that. We bathed together and shared intimacy that felt so much more intense than anything we’d had before. At no point did I question my love for Zoey. If anything, I fell more in love with her. I was with Zoey for her heart and soul, not her body parts.

The hardest part for both of us was realising we wouldn’t have any more children once Zoey started medication to transition. We already had two, George and Molly, but had been keen to grow our family. Knowing this part of our journey was at an end hurt for a very long time; even now we’re both sensitive to baby announcements but we have dealt with the pain together. Zoey describes her transition as ‘our transition’, as a family, and I think that’s so very true. We allowed our children time to process the news, read books together, talked, and one day they started calling her ‘Momma Zo’. From the beginning, they believed that Zoey’s happiness was all that mattered, and it’s the sweetest thing to watch their relationship flourish now that Zoey is who she was always meant to be. That’s not to say it has always been easy. Zoey has regular doctor’s appointments and is nine months into hormone replacement therapy (HRT). Her body is changing, and she struggles some days, feeling stuck between two worlds.

All I see, however, is the special person I met all those years ago. I would have still married her whether she’d been a trans or cisgender woman when we met. I have dated other women in the past and probably identify as pansexual, but I just think love is love, and Zoey is still the person I fell in love with – in fact, she’s more of that person than ever before. Perhaps people sometimes think transgender folk change personalities the moment they come out, but in my experience she’s still sweet, romantic, funny, and so completely gorgeous. Now we spend a lot more time together doing the things she’s always wanted to do: face masks, shopping days, painting nails. These might seem trivial or gender stereotyped to some, but they’re the things Zoey has been held back from doing because of these stereotypes. These were her hopes and dreams, and my job is to help make them come true. The way we love each other hasn’t changed either, it’s simply grown in abundance. I’m so thankful for that and I feel lucky and privileged to be by Zoey’s side, experiencing the highs and lows with her.

She has taught me that love is loving someone no matter what; it’s loving them for their soul, their sense of humour, their terrible taste in movies, and their heart. I can’t wait to grow old with Zoey. I know in 40 years we’ll be two old biddies drinking tea by the fire holding hands, and I’m more than alright with that.