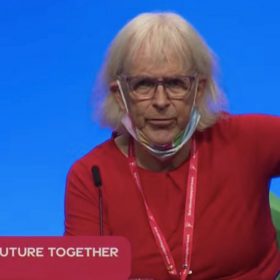 Councillor Patricia Hannah-Wood of Pendle Labour Party made the revelation in a packed conference hall, as she moved a motion on LGBT+ rights

A Labour councillor has claimed she suffered transphobic abuse from a fellow delegate at the party conference.

Ms Hannah-Wood, a trans woman, said: “On Sunday evening … I was in the loo downstairs with a few of my colleagues from the north-west when I was transphobically abused in this conference centre by one of our sisters in this conference hall now.

“It should not happen, we have got an anti-bigotry and anti-bullying policy in the Labour Party.

“We need it to be enforced.”

The Labour councillor made the allegation as she moved a motion on LGBT+ rights.

Deputy Labour leader Angela Rayner was applauded at the LGBT+ Labour fringe event as she offered support for trans rights.

“Women’s rights are not in conflict with trans rights, your struggle is our struggle,” she said according to GB News.

“This is not acceptable.”

This motion urged the party to recognise the “obstacles and growing violence” faced by LGBT+ people and to back moves to make so-called conversion therapy illegal and its use on under-18s a “form of child abuse, punishable by law”.

The motion, supported by conference, also asserted trans people’s “same right for self-determination as anyone else” and called for equal access to domestic abuse/rape support and shelters.

Councillor Kevin Brady, of LGBT+ Labour, said the “fight for basic human rights” for LGBT+ people is “very much a live issue.

He told conference: “The idea that progress is an unstoppable force never to be curtailed, the idea that we can’t start to slip backwards is dangerous and untrue.

“Hate crime is rising in the UK.”

The Mirror understands the party has spoken to the councillor and offered their support.

A party spokesperson said: “We do not tolerate abuse of any kind.

“Labour is the party of equality, committed to achieving a world free from all forms of bigotry and discrimination.”

Labour has been embroiled in a trans rights row after Rosie Duffield claimed she could not attend party conference because of her stance on trans rights.

In a tweet last year she questioned why she was being called a “transphobe” for “knowing that only women have a cervix”.

Sir Keir Starmer declined to call Ms Duffield’s comments transphobic but said it was not a right thing to say.

He told The Andrew Marr Show on BBC One: “It is something that shouldn’t be said. It’s not right.

“I spoke to Rosie earlier this week and told her conference is a safe place for her to come.