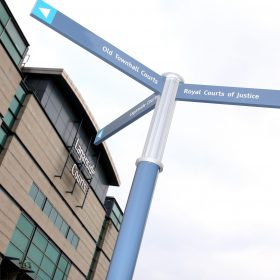 A man who kicked a transgender woman in the head during an “horrendous” attack in Belfast city centre has been jailed for five months.

Graeme Clarke, 40, subjected the victim to a string of verbal abuse and inflicted a series of blows while she was on the ground.

He also punched and kicked a man who intervened in a bid to end the violence.

Clarke, of Bloomfield Avenue in the city, pleaded guilty to two counts of common assault, criminal damage and resisting police.

Belfast Magistrates’ Court heard he became aware of the woman while sitting on a bench at Castle Place on July 6 this year.

The woman was knocked to the ground and kicked below the eye, knocking her glasses off.

Clarke continued to kick her about the stomach and shouted further slurs.

A man who tried to stop him was punched in the face, stumbling over before being struck repeatedly to the head.

When police arrived Clarke then directed his abuse at them.

“There’s absolutely no stepping away from the horrifying nature of this incident,” he said.

The court also heard Clarke is currently in mourning after his father, who had long-term health problems, died with Covid-19 earlier this week.

“While he is very upset he is taking this matter extremely seriously,” Mr Macdonald added.

“He made admissions and he expressed how embarrassed and ashamed he is.”

But imposing the five-month sentence, Mrs Bagnall insisted that “a marker has to be put down”.

“Harsh as this may sound in circumstances where he has just buried his father, this has to be immediate custody,” the judge said.

“These are particularly bad incidents, both in the context of how they occurred and the actions themselves.”

She agreed to release Clarke on bail pending an appeal against the prison term.