I am a straight trans man, and in my 28 years of life, I have never, ever dated someone. 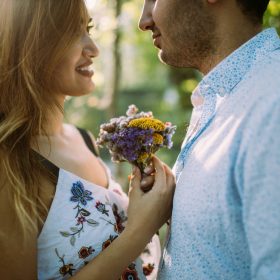 Photo by Elizabeth Tsung on Unsplash

You read that right.

I know this might seem like a red flag to prospective future romantic interests, but I swear, I can explain.

For the longest time, I never knew my reality as a trans man. Growing up in the rural South, I never heard of trans. Despite what I’d seen in a few movies or television shows, I wasn’t all that sure what gay or lesbian meant, either.

I had a sense as a young kid that I wasn’t female. It didn’t sit right. In games with other kids, I’d often “play” as the boy. I acted as the prince instead of the princess; the male sailor instead of the mermaid.

Even playing with dolls, I’d use my action figure of actor Aaron Carter instead of one of my female Barbies. While this isn’t inherently a boy or a girl thing — toys have no gender — I knew, on a subconscious level, that I related with manhood and masculinity in a way my childhood mind couldn’t as of yet comprehend.

It took years of self-reflection and the help of my friends to discover my truth as a trans man. But I discovered my sexuality long before I knew myself as trans, even if there were a few hurdles along the way.

In middle school when the other students began to have crushes, I suddenly felt left out.

I didn’t have a crush on anyone. I began to think I must be weird or strange to look at the boys in my grade and not feel anything while my friends gossiped happily about what boy they found cute.

So I chose a random boy in our class and called him my crush. My friends pressured me to tell him. Not wanting to be caught in a lie, I did.

It didn’t work out as planned.

The boy called me ugly and fat. He said he’d only date me if I got prettier.

I didn’t look at myself as ugly and fat, but at that moment, my whole self-image went south. I must be ugly, I thought. I must be fat. After all, no other boy had ever shown interest in me as of yet. My being “ugly and fat” must have been the reason.

Although I didn’t give a damn crush-wise about this boy, his words still hit deep. No one would ever date me, I thought. I was just too damn “ugly and fat.”

When high school came around, new students joined our class. I quickly made friends with new people, including two boys.

In high school, I had slimmed as I grew taller. My face thinned. My hair had grown long and blonde and reached my lower back.

I grew closer to my friends as the years progressed. I didn’t think about dating or about boys or girls. A part of me knew I liked girls, a part of me I only allowed to exist online. But I hadn’t met any girls at my school that I liked romantically.

Plus, living in the Bible Belt, our school was heavily anti-gay. At one point, a principal banned rainbow accessories because LGBTQ rights were, in his words, a “distraction.”

(The same man wouldn’t teach us evolution in our science course because “of the Bible.” He also blacked out in the science books any sex organ diagrams. High schoolers seeing a penis diagram? The horror!)

So I faked straightness.

Everything was going fine. I had a small group of friends — the girls from middle school I grew up with and two new boys I had become close to in high school.

But one night after one of my male friends dropped me off at home, he asked to talk alone. My chest tensed. This was it, I knew. We couldn’t just be friends.

“I like you,” I remember him saying. A romantic liking I couldn’t reciprocate.

I tried to keep things as they were before. We were a great group of friends, the high school outcasts, lovers of anime and Slipknot and Hot Topic cargo pants. In our tiny southern town, we needed each other.

He persisted in his liking of me. It grew obsessive and, at times, scarily violent. Once, he even threatened suicide. I felt obligated to try and uncover some sort of romantic feelings for him. I couldn’t.

The boy also loved to punch things when angry. I knew if I didn’t get away from him, that thing punched would not be his truck or bedroom wall. Someday, it would be me.

We stayed close up into college before our relationship slowly fell apart. Between school and working full-time, I didn’t have time to hang out anymore. He came around less and less before eventually moving away.

He’s now married to his middle school girlfriend and has children. I’m single and caring for my nephews.

Life’s funny that way, I guess. We never know where we’re going to end up.

I sincerely, with all my heart, hope he’s happy. I wonder if he still thinks of me, too.

During my first few years of college, I lived at home and commuted back and forth to the campus.

The living representation of awkwardness, I had a hard time making new friends. I attended a few student events, but I couldn’t seem to connect with people. There weren’t many clubs to join at the small two-year college.

What could go wrong?

I should’ve asked, “What could go right?” Because nothing did.

My commute to the new university took an hour-and-a-half drive one way every day. With a full-time job, I spent all my mornings and nights either in class or at work.

But even with limited time, I still wanted friends. I was an adult now with little connections outside of the family. College is the time you find yourself and make your real friends, movies told me.

I joined like-minded organizations. I joined in on events and school trips. I tried oh-so-desperately to be liked and to make friends, but I still didn’t.

At one point in my awful, awkward ways, I straight-up asked someone, “Can we be friends?” I admitted I didn’t have any friends at the school. I really wanted to meet new people, I said.

“I already have enough friends,” they said.

It felt like seventh-grade year all over again. Just like my fake crush didn’t want me because I was “fat and ugly,” no one at this school wanted me, either — not as a friend and definitely not as anything else.

Plus, how could I expect anyone to be my friend when I couldn’t even show them my authentic self?

As much as I feared rejection while appearing as the woman everyone thought me to be, I feared even worse the rejection for being trans.

As a woman, that wasn’t the real me. A part of me would separate that rejection as having been a different person being rejected. That wasn’t me they were rejecting; it was the me they thought I was.

I graduated from the university in 2017. My brother died the year before in a tragic wreck. Right after, my father received a terminal diagnosis of cancer. Then my sister received her diagnosis next: severe multiple sclerosis.

I no longer put my focus on friends, on dating, or on my transition. Dad needed me. Rachell needed me. Mom and my nephews needed me. We were falling apart and needed each other. That’s all that mattered.

Dad died. I lost my job. Mom lost her job. The pandemic turned the rest of the world on its head.

If the past four years have shown me anything, it’s that life is short. You never know what could happen — a wreck, a devastating diagnosis, unemployment, or even death.

Without a guarantee for tomorrow, it’s important to live our truth. I’ve waited 28 years to live mine.

Too often, us trans folks must hide our truth to simply survive. Between unsupportive family, job security fears, and concern for the literal safety of our lives, it’s not always easy to “come out.”

But when it comes to these close relationships in dating and friendships, deeper connections are made in the sharing of our truths.

You can make it easier for the trans community to share this deep part of ourselves with you. Share your support for our community. Let it be known to your friends, family, and coworkers.

Hi. My name is Cassius. I like to write poetry and take long walks in quiet cemeteries. I live on chicken tenders and blueberry Red Bull.

My best friend is a tiny chihuahua named Eli. My 15-year-old cat, Samantha, is my second mom. I also have a pet rooster named George and two albino frogs, Froggy 1 and Froggy 2.

Green is my favorite color. Sunflowers are my favorite flower. I take too many pictures of sunsets and full moons. I don’t take enough selfies. And P.S.: I am a straight trans man.

It’s nice to finally meet you.