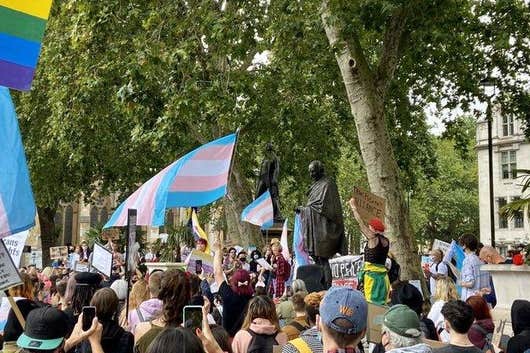 Hundreds of people flocked to Parliament square to protest against controversial changes to the Gender Recognition Act that are being considered by the Government.

According to reports in the Sunday Times, Downing Street is considering scrapping measures drawn up under Theresa May’s Government to enable transgender people to change their birth certificate without a medical diagnosis.

The Government is also said to be preparing new safeguards to protect female-only spaces – including refuges and public lavatories – to stop them being used by those with male anatomy.

Parliament Square was packed this afternoon with people calling for support of trans people’s rights in the UK.

Protesters held signs that read “love is love” and “trans rights now” as they listened to speeches.

The event organisers said they had seven demands for the Government including the protection of the right to self-identification.

The Sunday Times report said that the proposals were “basically ready” and it was being slated for publication by the equalities minister Liz Truss at the end of July before MPs break for the summer.

He told the Evening Standard: “With Trans Pride cancelled, today’s protests were such an important moment to amplify the voices of trans and non-binary people who are really concerned about reports the Government may roll-back on existing rights.

“Having theses speeches outside Parliament really mattered as we’re now expecting Liz Truss to announce plans regarding the Gender Recognition Act in the Commons within the next few weeks.

“The diversity and passion of these voices showed why any roll-back needs to be challenged and the Government needs to be held to account on delivering changes it has yet to deliver.

“I was proud to be standing with my trans boyfriend today and voice that trans lives matter and cannot be ignored.”

Many showed support on social media for the protesters while others claimed the changes to the Gender Recognition Act were to protect womens’ rights.

Piers Morgan responded to a question on Twitter about why people were against trans people’s rights to suggest they were defending womens’ rights.

The organisers of the event said on Facebook that the changes to the Gender Recognition Act were discriminatory towards trans people.

“We’ve been harmlessly using spaces that match our gender forever without issue, and people proved that they support us doing so,” said the organisers in the event description.

“This is a peaceful protest to demand that our rights not be removed.”

A No 10 source previously told the PA news agency that the details of the response were yet to be finalised, and the Prime Minister would have the final say on the recommendations.