How I disclosed that I was Transgender to my Mom 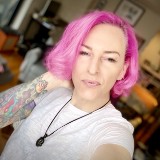 I had been hunched over my mental script for a long time — a couple of years actually. Writing, editing, rewriting the outcome; planning for every single possibility. In hindsight, it’s not surprising that my first thought after I’m transgender was will my mom accept me?

It’s rare for me to remember dreams, or be affected by nightmares. However, for a year or more, I found myself startled awake by dreams of coming out to my Mom — short of breath and sweating. There I was, night after night, upright in bed, panting, the image of her face quickly fading from view; that disorienting and sickening feeling that something had just occurred against my will. The type of dream where you have to touch something to ground yourself and even then, it took a moment to convince yourself that it was only a dream. It was a clear how deep my fear ran, and it was clear that I had to tell her. I couldn’t live in fear forever; it was destroying me.

I had been out to my wife and son for at least a year when we made the trip to Mississippi. I don’t recall the reasoning I gave my mother for coming to visit, but I suspect it was just simply “we haven’t seen you in a while.” It was relatively last minute, which was out of character for us. Fortunately, I’m a skilful liar. My mother had a high intuition. In order to out-manoeuvre her as a particularly defiant teenager, I had to match her intuition with my deception. Each day leading up to our departure I grew more anxious and excited. It’s difficult to portray the equal amounts of fear and joyful anticipation that coexisted during that time period; the aching desire to just be out and the paralyzing fear that those you love most will turn away. A fear not at all unfounded for Transgender people. Nonetheless, it was time to face that possibility.

A few days later we arrived in Mississippi. The reality of the situation immediately began to settle in. I knew I had to do it. Waiting was only going to make it worse. Besides, there was no going back. The truth was present in me always, and I wouldn’t change it even if I could.

So, there I sat in a musty, nicotine soaked recliner, my heart in my stomach, hanging my feet over a precipice of atomic change — a place we’ve all visited — looking for a reason not to jump. Stand up, Erica. Walk toward her. That’s all you have to do. So, I did just that. I took a deep breath and stood up.

My mother was directly behind me in the kitchen getting coffee, perhaps 10 feet away. Coffee was her water equivalent. There was always a pot of coffee made, no matter the time of day, and she was always refilling her cup. My siblings and I had multiple names for it — dark water, muddy water, and, even once, a crime against coffee. But, more generally, it was just Pat coffee. She was finishing pouring a cup as I rounded the corner of the kitchen. She looked up and gave me a smile. I walked toward her and the reality of it all finally conquered me. My heart knew I was about to be free and a tsunami of tears, which had been collecting inside for years, moved up through my body. With every step they neared the surface, and she could see it. She could always see it. Her face changed. I could see the worst thoughts forming. I didn’t make it to her before the tears breached the surface. Through a trembling voice and a well of tears I managed, “Mom, I need to talk to you. Can we go to your bedroom?” Followed up with a quick reassurance that everything was okay with my son and wife. “Of course, honey, of course,” she said. She lived for crisis. She was a counsellor by profession. So, she walked me through the dining room toward the hallway rather than having to walk through everyone in the living room.

We reached her bedroom at the end of the hall. Her room was exactly what you’d expect of a counsellor. A haven. A safe space. A purple couch, lamp light, knick knacks, journals and pens everywhere. We took a seat on the couch. The tears increased their flow. I don’t know that I’ve ever felt such a shock of emotion as I did that day. She looked at me, “What’s going on?”

“I have something I need to tell you. Nothing is wrong with [my wife] or [son]. I’m okay. I’m sure you’ve noticed that I’ve been changing lately.” The tsunami made landfall at that point. My mom moved in closer to me. She put her arm around me and said it was okay. The tears flowed even harder. “I’m transgender, Mom.” And, there it was. I had learned already from previous experience to just get to the point. I had rehearsed it over and over. A deafening silence set in. Every atom in my body held its breath while I waited on her response.

“I know, honey.”
“It’s okay.”
“I love you.”
That was what she said. To describe how I felt in that moment is simply not possible. Like all monumental moments in life, only the participants can know. It defies words. It simply has to be experienced. We sat there for a while, her arms wrapped around me while I cried, not from sadness but from relief and comfort. The comfort that only a mother can provide her daughter. She said so many other wonderful things. She said that she raised me to myself, and that this was right. She said she wasn’t surprised because I was raised by a strong woman. She said all the right things and then some. And as I sit here, barely able to see through my tears, writing this, I wish with all my heart that I could remember every word of it.

I began hormone replacement therapy just a couple of weeks later. She was admitted to the hospital three days after that. We learned that she had lung cancer. And, three months later, in October, she passed away. Every single day I’m grateful for all that she did for me, but that moment on her couch is the one I go back to most often. I wish my coming out experience could be what every transgender person experiences. Sadly, it is not. My experience was unique. If I had just one more moment with my Mom, I would hug her and tell her just how much that day meant to me; how I am the person I am today because of her.