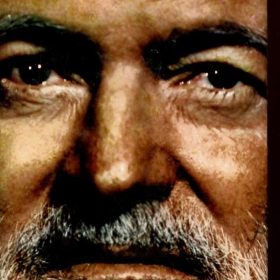 Gloria Hemingway’s story, for many transgender people, is all too familiar.

Born in 1931, the youngest Daughter of famed author Ernest Hemingway remained locked in a lifelong battle of rejection, abandonment and consequentially became mired by alcoholism to cope with the extreme mental anguish she suffered. Her story is a tragedy, to be certain, and although she died alone in a jail cell back in 2001, what little media coverage she was offered in both life and death is rife with dead-naming, misgendering and headlines produced solely to induce shock.

But during her life, Gloria sought only peace where none was to be had. From an early age, her gender expression was problematic for her Mother, Pauline and famous Father, who was well known for his machismo- the very picture of masculinity. According to Her childhood friend, Donald Junkins, Hemingway’s Father walked in on her as a child of just 10 years old wearing her Step-mother’s dress. Ernest went “Berserk” at the sight of it. It was just the beginning of what writer Nara Schoenberg describes as an ongoing “bloody psychological warfare” between the Father and trans daughter.

Unable to meet the expectations of the gender she had been assigned at birth, Gloria fought for decades to push back the tide of dysphoria that consumed her life, including joining the Army in late 1950. Hemingway married and divorced three times and re-married her last wife, Ida, after initially divorcing. But, it was a statement by her second wife, Valerie, that shed light on Hemingway’s painful journey to self acceptance and the consequences of being transgender in an era where little was understood about diversion from traditional gender roles.

“All his life (Deadname Retracted) fought a losing battle against this crippling illness. He lacked critical early help because his parents were unable or unwilling to accept his condition nor could he come to terms with it himself for a long time, taking up the study of medicine in the hope that he would find a cure, or at least a solace. Failing that, he developed an alternate persona, a character into which he could retreat from the unbearable responsibilities of being, among other things, his father’s son, and of never ever measuring up to what was expected of him, or to what he expected of himself.” — Valerie (Hemingway) Danby-Smith

Indeed, Gloria became a Doctor in 1964, graduating from Miami University School of Medicine, in hopes of curing herself of her own dysphoria, but what happened beforehand highlights how the medical industry failed her. Afflicted with severe depression and a desperate desire to meet social demands, she subjected herself to hundreds of electroshock therapy treatments in pursuit of peace according to Hemingway family biographer, Jeffrey Meyers. Her relationship with her now-distant father seemed damaged beyond repair, in fact, the elder Hemingway blamed Gloria for the death of her Mother, Pauline, believing the stress of Gloria’s “cross-dressing” which had caused a fight between her parents after one tedious phone call had killed her. Pauline suffered from an undiagnosed tumor in her adrenal gland. Gloria’s own medical knowledge led her to write a letter to her estranged Father in an effort to absolve herself of blame by explaining the condition that had actually resulted in her Mother’s death. She hoped, if he understood the reality of the condition Pauline suffered from, that her Father would agree to reconcile.

The next year, Ernest Hemingway committed suicide, leaving Gloria to wrestle with her guilt, forever mourning the Father lost to her because she could not be what he wanted her to be.

There is a prominent through-line in the description of Gloria provided by those who knew her. “Kind.” “Gentle.” “Charming.” “Compassionate.”

“I loved him and he was a good man,’’ His daughter Lorian Hemingway, whose own book Walk On Water was nominated for a Pulitzer, told Yahoo News in 2001. “He was a man of great compassion and self-searching, and he bore the necessary cross of being human. I believe the thing he wanted most of all was to please others and to be loved.’’

And Ida Mae Galliher, Gloria’s wife- twice- loved her. Having married her pre-transition and again two years post transition, the two stayed united until Gloria’s passing. She said of Gloria after her death, “He was so complicated. His best day, he was soft spoken, very generous, interested in what everybody had to say. He read a lot. On his bad days, when he was depressed, he was totally incapacitated. It was beddy-bye time for days at a time.” She concluded by sharing, “He suffered all his life. He just had this burden he couldn’t get rid of — his dark side.”

Although Gloria’s timeline was pocked with crisis leading up to her untimely death in a jail cell in Miami-Dade Women’s Detention Center where she was booked for Public Indecency and Resisting Arrest without Violence, the impression of goodness persisted. Her arresting officer, Nelia Real said: “He said his name was Gloria. He looked like a man, but his nails were painted and he was wearing jewelry and makeup. He was very nice to me. At times he was very coherent, but other times he didn’t make any sense. He had no shoes and he had a dress and high heels in his hands. I feel really bad that that happened. He was a very nice guy.” It was this arrest just days before her death that led to the publicizing of her most famous -if not outrageous and inappropriate photo– taken while in custody by the Officers. There is no explanation as to why the authorities would produce or release a photo of an exposed transgender woman in their custody.

Gloria completed her sexual reassignment surgery by 1994, at one point, while struggling with poverty, getting only one breast implant early on. Her relationship with her gender freedom was in constant conflict with her desire to be who others expected her to be- or those she perceived as needing her to be; The Son she could not be, the Husband she could not be, the Father of children she wanted to make proud rather than embarrassed or ashamed. Years after her stop/start transition began, both physically and socially, she still slipped back into the male presentation when she felt it was necessary or most appropriate for those she would be in the company of.

It is clear, historically, that to Gloria, she was only ever a woman. Yet, the world outside of herself would never allow her to exist as one; Not in life, not in death. All articles and public records, including statements from family, friends, authorities and the general media refused to allow her the right to her own identity… with one academic article from the University of Michigan by Lynn Conway going as far as referring to her as “Him/Her” and claiming she was “addicted to fetishistic transvestism.” The article also criticizes her for having occasionally dressed in a masculine fashion post transition and warns the reader, “More proof that there are a group of people like Anne Lawrence who get modifications to their bodies with no interest in a social role. Many seem to be wealthy (especially “professionals,” i.e. doctors and lawyers) and in midlife crisis.”

This year marks the 20th anniversary of the death of Gloria Hemingway, a beautiful, vibrant spirit according to most everyone who knew her, but a tormented soul who suffered the betrayal of her spirit by her body and was endlessly punished for it. She was buried in a small Ketchum, Idaho cemetery beneath a headstone that reads a male name. Her obituary bids farewell to a man with only a sidebar mention of her actual name but identifies her as He/Him. Her will, which awarded the bulk of her 7 million dollar estate to her Wife at the time of her death, Ida, was contested by her Eight children who claimed that if their Father was a woman, the will was not valid as same-sex relationships were not recognized by the state of Florida. Her children eventually settled with his widow.

Even today, her truth is not honored nor is she offered the humane dignity she deserves in remembrance.