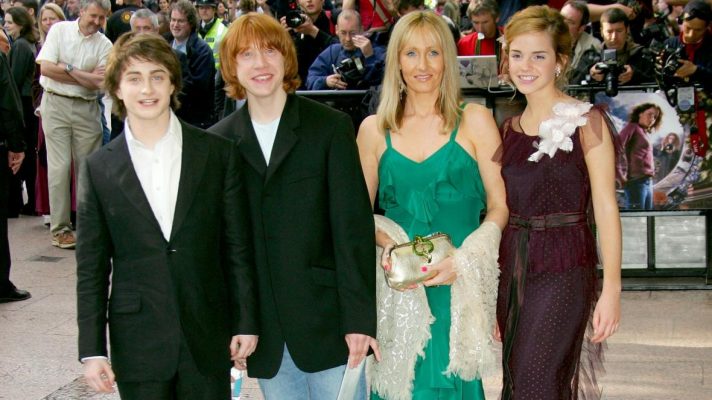 The Harry Potter stars Daniel Radcliffe, Rupert Grint and Emma Watson with JK Rowling at a 2004 premiere. All three are at odds with the author over her remarks

The three principal cast members of the Harry Potter films were united yesterday against JK Rowling after the author became embroiled in a war with transgender activists following remarks that she made on Twitter.

A school has also dropped the author as a name for one of its houses. The Weald School in Billingshurst, West Sussex, said she was “no longer felt to be an appropriate role model”.

Grint issued a statement to say that he did not believe in distinctions between people born as women and those who had transitioned. “I firmly stand with the trans community and echo the sentiments expressed by many of my peers. Trans women are women. Trans men are men,” he said. “We should all be entitled to live with love and without judgment.”

Grint’s intervention follows similar statements by Radcliffe and Watson, both 30, who played the other leading roles in the adaptations of Rowling’s novels. Radcliffe said: “We need to do more to support transgender people and non-binary people, not invalidate their identities and cause further harm.”

Watson wrote on her Twitter feed: “Trans people are who they say they are and deserve to live their lives without being constantly questioned or told they aren’t who they say they are. I want my trans followers to know that I and so many other people around the world see you, respect you and love you for who you are.”

Rowling, 54, started the dispute when she tweeted her dissatisfaction with a headline in an article on an international development website in which the phrase “people who menstruate” was used instead of “women”.

She elaborated her views in tweets followed by a 3,700-word article on her website in which she described her empathy with trans women but deplored attempts to “erode ‘woman’ as a political and biological class”.

On Wednesday Rowling shared details of her private life, identifying herself as a survivor of sexual assault and an abusive marriage in an essay in which she took on critics who accused her of hating the trans community.

In a letter to parents, The Weald School said it had recently chosen the names Da Vinci, Seacole, Mercury, Attenborough, Rowling and Thompson for its new houses. These were named after Leonardo da Vinci; Mary Seacole, the black nurse from the Crimean war; Freddie Mercury, Sir David Attenborough and Baroness Grey-Thompson, the Paralympian.

The school wrote: “It has come to light that one of our new names may in fact no longer be an appropriate role model for our community. JK Rowling has tweeted some messages which are considered to be offensive to the LGBT+ community (specifically, transphobic) and we feel that we do not wish to be associated with these views. We have taken the decision to remove the name Rowling from our new house and it will be called Blackman instead.”

The author Malorie Blackman was Children’s Laureate from 2013-15 and “uses her writing as a way of exploring social and ethical issues,” it said.

Peter Woodman, head teacher of the Weald School, said the decision had been made because its ethos was that every individual matters and is unique. “We felt that [Rowling’s] comments . . . marginalised a section of society,” he said. About half the responses from families had been in favour of the change and the rest were complaints.

In her essay Rowling said she felt oppressed by her “constant targeting” by trans activists, who have referred to her as a Terf, or “trans-exclusionary radical feminist”, but that she would maintain her position that biological sex had meaning for her and other women.

She said: “I refuse to bow down to a movement that I believe is doing demonstrable harm in seeking to erode ‘woman’ as a political and biological class and offering cover to predators like few before it.”

Three other Harry Potter stars have joined Radcliffe and Watson, who played Harry and Hermione Granger, in opposing Rowling’s stance. Evanna Lynch, 28, who played Harry’s ally Luna Lovegood, said that Rowling was a friend but that she was on the wrong side of the debate. “Feeling like you don’t fit in or aren’t accepted for who you are, are the worst, most lonely feelings a human can experience and I won’t be helping to marginalise trans women and men further,” she said. Bonnie Wright, 29, who played Harry’s admirer Ginny Weasley, wrote: “Trans women are women.”

Companies that may suffer from a boycott of the Harry Potter stories gave guarded responses yesterday. Warner Bros issued a statement that appeared to support Rowling while declining to comment on the issues she raised. “We deeply value the work of our storytellers who give so much of themselves in sharing their creations with us all,” it said.