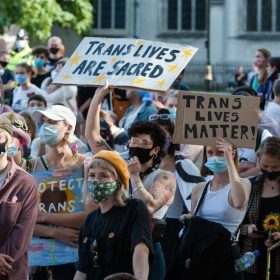 The fee to apply for a gender recognition certificate has been cut to £5, the government has announced.

Ministers pledged in September to slash the cost of legally changing gender from £140 after deciding against wider reforms.

While cost has been cited as an obstacle to applying, some LGBT groups say more work is needed.

The BBC revealed last month that the cost would be reduced to single figures from early May.

A consultation was set up in 2018 to explore potential reforms to the way transgender people can apply for a gender recognition certificate (GRC) in England and Wales. This allows someone’s acquired gender to be recorded on their birth and marriage certificates.

The existing process – which requires two medical reports – had been criticised as costly and bureaucratic.

The government estimates there are between 200,000 and 500,000 transgender people in the UK, although the actual figure is not known.

A total of 5,871 full GRCs have been granted since 2005, according to the latest official figures.

In September 2020, following a highly charged debate about the potential impact of changing the law, the government announced it would not fundamentally reform the process.

At the time, Ms Truss said there were “proper checks and balances in the system” – but pledged to make applying “kinder and more straightforward”, including reducing the fee.

In a statement after the reduction came into force, Ms Truss said: “As we build back better, we want transgender people to be free to live and to prosper in modern Britain.”

“In the National LGBT Survey, 34% of transgender people told us that the cost of applying for a certificate was holding them back from doing so,” Ms Truss said.

“Today we have removed that barrier, and I am proud that we have made the process of getting a certificate fairer, simpler and much more affordable.”

Government sources have previously told BBC News that making the service completely free would take longer because it would require primary legislation.

The government has also said it is working “at speed” to move the application process online.

However, some LGBT charities have called for more fundamental reform.

Nancy Kelley, chief executive of Stonewall, said reducing the cost and streamlining the application process were not substitutes for “meaningful reform to the Gender Recognition Act”.