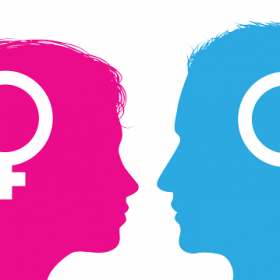 All three of our children were born male-bodied. For each child in turn, my husband Shane and I celebrated, “It’s a boy!” (At the ultrasound for our third child, the doctor said, “Well, that’s something you’ve seen before. That’s a penis.”) Being the parents of three boys was a basic fact of our lives.

Our oldest child came out to us as trans in 2018, shortly before she turned 15. She was suicidal at the time and the entire experience was a surreal crisis, but our family made it through. She is doing well now. Her mental health is good and she is starting her second year in the dorms at a state university. She is happy.

Our second child came out to us in 2021 (first as non-binary, then trans), also at the age of 14. Thankfully she was not suicidal, and since we had done this once before, it wasn’t as shocking of an experience.

Our third child is now 12 and I recently overheard him assert to someone that “[his] pronouns are he/him, thank you.” I admit I hope that sticks, because many things will be easier for him as as cisgender person. But if he has gender-related news to share in a few years, that will be OK too.

I didn’t write about Victoria (our oldest child) coming out, even though it was a huge event in our lives at the time. She is a private person and her coming out journey is not my story. I have spoken up to friends and family about trans issues in the news, especially when I know the facts are being misrepresented. (Such as, genital surgery is not part of trans kids’ gender-affirming care! Surgery is a choice some trans people — not all — make as adults.)

I almost wrote something this past March, when I first learned some politicians and talking heads were claiming that “liberal parents” were “forcing” their children to be trans, “for woke points” or some other ridiculous notion. It never occurred to me that people would think I had forced this on my kids. No one who knows what being or having a trans kid actually entails would think it was a hot new trend all the hippest lib parents choose to do. That’s ludicrous.

What has brought me forward now (with Victoria’s consent) is the fast-spreading political claim that gender-affirming care is harmful for trans children; that it is akin to child abuse or medical malpractice, and should be banned. That is the opposite of the truth. Gender-affirming care saved our child’s life.

I don’t think anything I could write now would capture the desperation, fear, relief, and eventually joy I experienced as the parent of a suicidal, trans teenager as well as this journal entry I wrote on the first anniversary of the day our daughter didn’t kill herself. I’m sharing part of it here, with names changed to protect our family’s privacy, because this isn’t a political issue. It’s a human issue. It’s about kids who need help and acceptance and parents who love their children and want them to thrive, even if they don’t fully understand their kids’ experience.

Tomorrow is President’s Day. One year ago Victoria planned to kill herself on President’s Day. She had made a noose and planned to hang herself from the tree in our front yard. I didn’t know that then and I wouldn’t find out for another week, because she didn’t do it. Thank god. She didn’t do it because her friend happened to invite her over to spend the night the night before and she went. She stayed up late at their house, slept late the next day, and by the time she came home she had missed her planned time and opportunity. THANK GOD.

A week later she told us that she was trans — that she was Victoria, not Victor — and that she was suicidal and had made a noose. Shortly after that, as the story came out, I learned how close it had been. That only a well-timed invitation had saved her. Only luck and friendship kept her from trying to hang herself from our apple tree early one morning.

I’ve had this feeling, ever since, that a parallel universe was created that day. Alternate Universe Lori woke up on President’s Day and found her oldest son hanging dead in the front yard. AU Lori had to try to figure out why. Found journal entries in her grief that explained her son wanted to be her daughter instead. AU Lori’s world fell apart one year ago tomorrow morning when she lost her oldest child. How has her year been, since then? How hard is she sobbing right now, facing the anniversary of the most terrible day she ever experienced? Is she still married? How are her other children?

Did she chop the apple tree down?

I wanted to chop the tree down for months afterward. It bothered me so much. Shane didn’t understand. I would have done it if I thought it would help Victoria, even though the other kids (and the neighbors) would have asked questions that I couldn’t (or wouldn’t) answer. I might have done it just to keep from having to look at it if Shane hadn’t reacted the way he had to the suggestion. If I were a single parent, that tree would be gone now.

Victoria didn’t need me to chop the tree down to help her. Thankfully, she had professional help and our love, acceptance, and support. Shane took the noose the day she told us about it, before she got home from school. I’ve never seen it and I don’t know what he did with it. It’s gone. We stayed by her side that first night, all night, and she saw a therapist the next day. The therapist told me that if she had seen Victoria the week before, she likely would have hospitalized her to protect her, but that wasn’t necessary now; she was doing better, the worst had passed. I was stunned. How could I not know that my child was that bad off? Seriously suicidal? Had a plan and very nearly acted on it?

. . . Last night I told Shane how I was feeling about this “anniversary” and he didn’t understand why I was so upset. He said, “But Victoria is in a much better place now than she was then; she’s happy, she’s doing well.” And he is right. I’m thankful every day that is the case. She also has a therapy appointment later this week. She started taking estrogen on February 6th and that was a huge goal for her; a milestone. She’s come a long way in a year. She has a long way to go. (Don’t we all.)

There was a period of time last year, before all this, when I suspected that Victoria was trans and tried to ask her about it. She laughed me off, deflected — didn’t outright deny — and I was relieved to take that as a denial and move on. I figured I had gotten carried away in my imagination. I was relieved. Having a trans kid sounded terrifying and difficult (for both child and parent). I didn’t want that for either of us. I had no idea that she was so depressed. No clue that she could be suicidal. A few months later, when she told us she was a girl, she told us that at the same time she said she wanted to kill herself. The same message. The news came to me in a package. Part of this year has been spent trying to tease those two facts apart. My child is trans. My child was suicidal. These things are related, but separate. They do not always have to go together. My child is not suicidal now. She is getting help. She is happier. It is OK.

I have told therapists and doctors and other parents of trans kids that I felt like I was locked into a track. That track might have a train on it or just me speeding down a ski slope out of control, I’m not sure. But I felt like the path I was on was set: “if you do not want your child to kill herself, this is what you must do.” Step 1, 2, 3 . . . . And I do not want my child to kill herself, so I take these steps, but I do not understand all of them and I am terrified. I think I may not feel that way any longer. Everything was leading up to Victoria starting estrogen (she told us she wanted it right off the bat, and that she knew how to order it for herself online if she had to) and the doctors and the therapists told us that she could take it if 1, 2, 3 . . checkpoints, hoops . . . but that we didn’t have to allow her to do it, we had to make sure we were ready . . . and always in the back of my mind was, “but this is what you need to do to keep her alive . . . trans kids are 40% more likely to be suicidal than other kids . . . if you deny her, she’ll go to the internet or run away, etc.” so I was marching towards a set destination. But it took a long time and there were checkpoints and hoops and we did them all. Then it got to the point the last checkpoint was her cardiologist. The cardiologist said it was fine. Victoria made her own appointment for estrogen. We had already signed the papers. Shane took her and Victoria started the pills that day. Twenty days shy of 1 full year since she came out to us. So it’s been 11 days now and of course there are no visible changes yet. It doesn’t work like that. It’s all very anticlimactic.

Our daughter is happy. She is well. I will wake up in the morning and so will she and we will all go to the movies with Shane’s dad in the afternoon. We’ll probably see The LEGO Movie 2.

I am so grateful that this is my life that I want to lie down on the floor and weep with relief and sing songs of joy. My heart breaks for that other Lori, in another timeline, and her oldest child who made another choice. I don’t know when I won’t feel their shadows.

What is the controversial, frightening choice we made as parents in 2018? We chose to get our child appropriate care from mainstream medical professionals in order to save her life. (I mean, really — our family has an HMO. HMOs are not known for offering cutting-edge or experimental treatments.)

“Gender-affirming care” can be a lot of things, but at its core, it is accepting what people (in this case, our own children) tell us about their experience of their own gender. It can be something as simple as letting a child select their own clothes — maybe those clothes are pink instead of blue, or have trucks on them instead of flowers. So what?

Is acceptance of one’s own child and a willingness to follow the advice of trained medical professionals in the care of that child something we as a society think is so dangerous we must ban it? No. Is my energy as a parent best spent insisting that my child’s genitals dictate their life choices and personal expression? No.

And do I think being the parent of a trans kid is a trendy new label that’s going to make me the talk of the liberal book club? No. I am, in fact, writing this under a pseudonym because I’m afraid that if I use my real name, my family will be harassed online and in person, receive death threats, or worse. For admitting that we love and support our children. For asking that the treatment that saved our daughter not be denied to other families who may need it.