Conservative MP Jamie Wallis, who revealed he had gender dysphoria last month, said he planned to transition to become a woman ‘as quickly as possible’

Britain’s first openly transgender MP has said he plans to transition to become a woman “as quickly as possible” in a moving interview where he opened up about his rape ordeal.

Conservative Jamie Wallis revealed he had gender dysphoria in a statement last month, where he also said he had been a victim of separate crimes of blackmail and rape.

In an interview with Sky News, the Bridgend MP said he had felt like his body did not reflect who he was since he was 8-years-old but he was “very frightened” that people would find out.

The 37-year-old said he wasn’t able to find out “whether this was something that affected just me or whether there were other people that might feel like this” – which led him to believe that something “had gone very wrong”.

He said: “I think I characterised it as just a mistake, that I was a mistake. I spent a lot of time as a child trying to hide that because I was very, very worried and concerned about what that might mean, what that might mean if anybody else found out and it was much later when I realised that actually there are other people that feel that way.”

Mr Wallis, who uses the pronouns he/him, told young people struggling with their gender identity not to “wait as long as I’ve waited” but added that there was “nothing wrong with just taking some time and discovering yourself”.

He said he wanted to begin the process of transitioning, adding: “I’d like to begin as quickly as possible but it is a … it’s not quick, it is challenging and difficult and there are lots of hurdles to overcome and it’s not going to be done overnight.

“It’s going to take many, many years and I think now that I am out and people do know, I am free to start that and actually take that, go on that journey at a pace that I find comfortable.”

Mr Wallis previously disclosed he was raped by a man he “hooked up” with after meeting online.

Tory MP Jamie Wallis, pictured in the Commons, praised the support he had received from colleagues 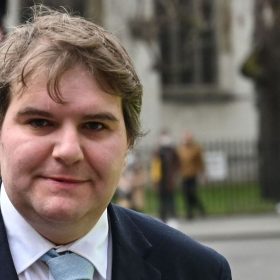 He told Sky News “a part of me died” after the ordeal and suffered nightmares and flashbacks as a result.

He said: “I met someone that I liked and things started off quite well actually. Then I was not okay with not being what I consider to be responsible and practice safety in the bedroom and so I withdrew consent and then there was … then he just decided that he was going to do it anyway and I was powerless to stop him and in that moment a part of me died and I have been trying to get it back ever since. ”

Mr Wallis added: “I tried to forget about it for a few weeks and it almost worked, almost worked but then you start getting nightmares, flashbacks, it starts occupying every one of your thoughts and you find yourself just staring off into the distance because you’re thinking about it again and that’s when I chose to get some help.

The MP said it was “truly frightening” to discover the “shocking” number of people who got in touch with him to talk about their similar experience.

Mr Wallis also touched on being targeted by a blackmailer who threatened to out him to the public unless he paid £50,000.

He said he had received huge support from across politics after he opened up about being trans, including from the Prime Minister.

His statement came shortly after Mr Johnson reportedly opened a speech to Tory MPs with a joke saying: “Good evening ladies and gentleman, or as Keir Starmer would put it, people who are assigned female or male at birth.”

The PM later commended Mr Wallis’s statement by saying it “would have taken an immense amount of courage”.