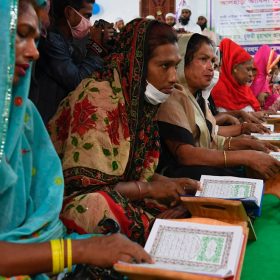 For centuries transgender people in the subcontinent have faced ostracisation, but the school hopes to change that, at least for some

In a move to integrate the transgender community, Bangladesh has opened its first school dedicated solely to trans people in the capital city Dhaka, where they will teach Islamic values and vocational subjects.

The school is a privately funded madrasa (seminary) and has been made free of charge for a community that has so far lived cut off from society, only earning their livelihood through dancing in special functions.

Officials at the Dawatul Islam Tritio Linger Madrasa, or Islamic Third Gender School, said the institution will not have an age limit so that anyone can enrol and study. The madrasa’s education and training secretary, Mohammad Abdul Aziz Hussaini, told the BBC Bengali service: “Whether or not someone is of the third sex is identified at a fairly mature age. That’s why we don’t set any age limit. Anyone can be admitted here as soon as a transgender person is identified, no matter what age they are.”

The country recently identified trans people as a third gender through a new amendment in 2018, providing them with the right to vote and stand for election. According to government data, the country has a population of about 10,000 trans people, though other estimates say it could actually stand at over 50,000 people.

However, the community, locally called “Hijra”, has faced ostracisation for centuries. The traditional work of the community in the subcontinent has been to dance and sing at weddings, birthdays and auspicious occasions; many also resort to begging or prostitution.

A new student at the school, Shilpy, said most of the trans community were illiterate and did not have work opportunities.

“No one wants to hire us. If we had some education, we could have worked somewhere better. There is no education system. That is why we still do what our ancestors did and earn money by dancing and singing,” said Shilpy.

Talking about the bullying, Shilpy said: “When I realised I was a transgender person, then everyone in the school hated me, was afraid, criticised me. That’s why I didn’t study anymore. If there was a separate reading system for us, no one would tease.”

Shilpy added: “We also want to be like other people, to walk with dignity. We also want to stand on our own two feet. If I get a chance, I will go that way.”