Party accused of “struggling with the words misogyny and trans misogyny” 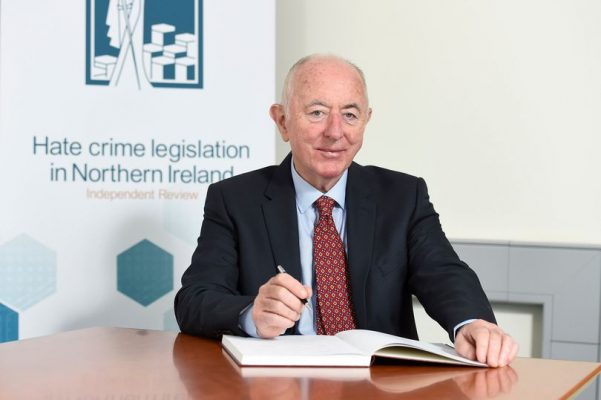 The DUP have opposed a local council motion declaring support for misogyny and trans misogyny as a standalone hate crime offence.

Despite the opposition, councillors at this week’s remote Ards North Down Council corporate committee carried the motion, which specifically mentions the need to create misogyny and trans misogyny as a standalone offence.

The DUP tried to pass an amendment which took out the words misogyny and trans misogyny and rephrased the motion to condemn “a variety of crimes”. Eight councillors voted against the amendment, six voted for it, with one abstention.

The issue has been debated in several councils across Northern Ireland as the results of an independent review of hate crime legislation in Northern Ireland, led by Crown Court Judge Desmond Marrinan, are expected in the autumn.

The original cross-party motion in Ards North Down, submitted by Green Councillor Kathryn McNickle and Alliance Councillor Karen Douglas, received nine votes in favour. All five votes against the motion were from the DUP.

The motion proposed the council “recognise the impact of misogyny and transmisogyny on those affected by it, as well as the role these attitudes play in a variety of crimes including harassment, assault, sexual assault and hate crimes, and on the career choices and personal lives of women, girls and non-binary people”.

The motion also asks that Ards North Down Council “supports the inclusion of misogyny as a standalone offence and as a category of hate crime, recognising crimes targeted at women including trans women as hate crimes based on misogyny, and will write a letter to that effect to Judge Desmond Marrinan, as part of his ongoing review of hate crime legislation in Northern Ireland.

Lastly the motion proposed the council “supports also the Raise Your Voice Project, which tackles sexual harassment and sexual violence across Northern Ireland, by placing posters in all Council properties to raise awareness of the project.”

DUP Councillor Stephen McIlveen forwarded an amendment to the original motion, which gave a thorough rewording. It read: “This council recognises the impact of a variety of crimes including harassment, assault, sexual assault and hate crimes on the career choices and personal lives of all those affected and condemns the perpetration of such acts.

“As the consultation for Judge Marrinan’s review of hate-crime legislation expired on April 30th 2020 the council encourages all of its members, political parties and members of the public to continue to engage with the process, particularly when the report is published, to ensure the breadth of opinion on this important issue is heard.

“The council also supports the Raise Your Voice project which tackles sexual harassment and sexual violence across Northern Ireland, by placing posters in all Council properties to raise awareness of the project.”

Councillor McIlveen told the committee: “The form of the words I have chosen is not to exclude anything, but to include. I haven’t excluded misogyny or trans misogyny, I have included all hate crime. The point of my amendment is we have missed the window of opportunity in terms of the consultation period for Judge Marrinan’s review.”

He added: “I agree there are gaps in the hate crime legislation. I have a side issue with the original motion in terms of it being phrased as a stand alone offence how hate crimes are treated.” He said it was a “fully inclusive amendment.”

Alliance Councillor Nick Mathison said: “The first part of the original motion was for the council to recognise the impact of misogyny and trans misogyny. The amendment dilutes that rather than broadens it. The motion was brought clearly with that intention and we have to preserve that element.”

He added: “I was disappointed to see the DUP seem to struggle with having trans misogyny and misogyny in the text and I’m not really sure quite why that is.”

Independent Councillor Tom Smith told the committee: “What I find quite disturbing is that the DUP, given a couple of chances, can’t put the words misogyny and trans misogyny into their amendment. Now it shows there is obviously a split, as the DUP in Belfast can support it – I don’t know why North Down can’t.”

The motion will go to the next full meeting of Ards North Down council for ratification.

Focus: The Identity Trust commented below

Focus: the Identity Trust warmly commends Ards North Down Council for their motion in respect of hate crime, which specifies that misogyny is misogyny irrespective of whether the woman concerned is transgender or cisgender. However, it should be remembered that transition is both from male to female and from female to male. Transgender men also need to be fully protected from hate crime, as do members of their families. Within our membership, we know of many attacks on transgender men and on members of their families, on the basis of transgender identity.