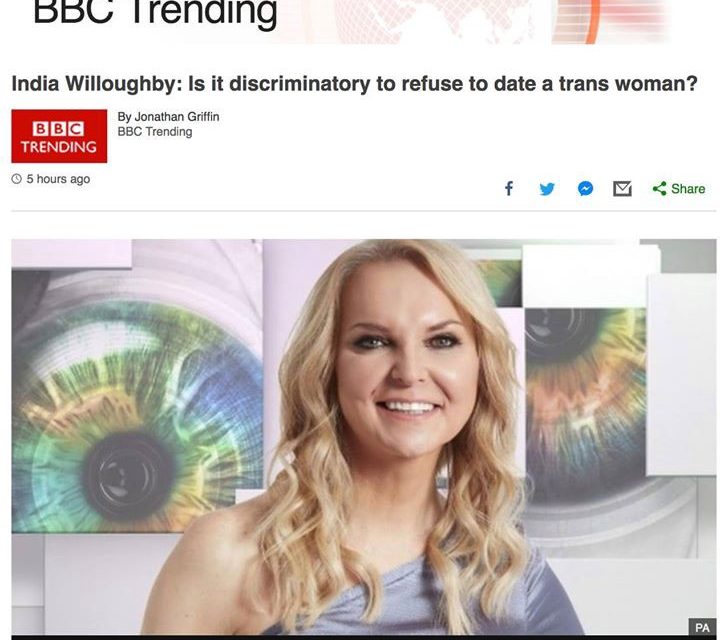 Is it discriminatory to refuse to date a trans woman?

Was the question asked in a BBC Trending article earlier in the year when India Willoughby accused her fellow housemate Ginuwine of being transphobic because he refused to kiss her on Celebrity Big Brother in the UK.

“You would date me, yeah,” India Willoughby, a trans newscaster, asked. “Not if you were trans,” Ginuwine, an American rapper, replied whilst giggling.

The writer of this article and I spoke extensively on the phone about this subject and why I don’t think it is that clearcut to label the CBB scene involving India and Ginuwine transphobic.

India was prone to self-victimisation, which led to her embarrassing behaviour throughout the show. Perhaps, it is because her journey into womanhood is still at infancy. Not all rejections are transphobic, from my experience as a single trans female who is in the dating scene, most of my rejections were out of ignorance and lack of education on what it means to be trans.

Ginuwine’s reaction to India’s question and gestures was done out of prejudice other than transphobia. If he was transphobic, he wont sit next to India or respect her gender identity by using female pronouns to describe her. He may have internalised transphobia like most men, but his behaviour on the show throughout never hinted it to me as a viewer. The simple explanation of that scene is….. INDIA IS NOT HIS TYPE!

Hypothetically speaking, if fellow contestant, Ashley James, who is a cis gender woman and his love interest on the show, comes out to him as a transgender woman, then his behaviour after Ashley’s hypothetical trans reveal will show if he is transphobic or not.

He told India that he would instantly be disinterested if he knew that the girl he was fancying is of trans experience. His response is quite common for trans women in dating environment. 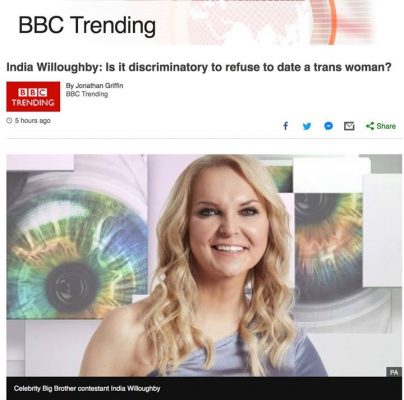 In my opinion, he is uneducated on what it means to be trans. India had the opportunity to engage and educate him on the subject in that scene, but she started playing the victim by getting angry and walking off the scene. Thus, missing a golden opportunity to change minds about our community. Which left the public and Ginuwine uneducated about why a cis man dating a trans woman doesn’t make him gay. Which is the common notion amongst men who unknowingly fall for a trans woman.

From my experience with online dating, below are examples of what makes a man transphobic if he rejects a transgender woman:

The first stages of attraction includes the person’s gender identity, carriage, appearance, personality, and many other characteristics we find appealing in humans. Medical life history of the person does not come into question in the earliest process of attraction.

When straight cis gender men do not know about the medical life history of a trans woman, they will gladly date that trans woman like they would any other cis woman, because trans women are women too. It becomes an issue because society labels trans women as ‘Men’, and men who date or find trans women attractive as ‘Homosexuals’.

All of the above and many other negative reactions to trans women by men who find them attractive in general are as the result of sexuality insecurity and fragile masculinity. Because these men still sees post or pre op trans women as ‘men in dresses’. The men find it hard to accept their insatiable attraction to certain trans women who are sometimes the over-exaggeration of femininity due to society’s patriarchal definition of what a woman should look like. So it is normal for any full blooded heterosexual male to find an overtly feminine trans woman attractive, but hides it because he doesn’t want to be judged by society or labelled gay for finding a trans woman attractive.

suggesting that young Britons could be more segregated than ever. Channel 4

I used the channel 4 show ‘Is Love Racist? The Dating Game’ as an example for why certain preferences can lead to hate and violence in our community. Trans women are dismissed as love and life partners by most men because they are afraid of how society will interpret their relationships. In a world where labels are paramount to segregation/classification, men always worry about how the world will perceive them. The common question they ask when they find a trans woman attractive is.

DOES IT MAKE ME GAY FOR FINDING A TRANS WOMAN ATTRACTIVE?

My simple response to the men is…….. You are gay if you see trans women as men! Do I look like a man to you? They exclaims ‘No!’ apologetically. I go further by explaining that what makes a gay man gay is his attraction to a fellow human being who identifies as a man/male. Since I present and I identify as a female, and you find me attractive, you are straight, if labels are that important to you!

There are many proud cis gender men in love, dating and are married to trans females all around the world. Although not celebrated in media, we make good girlfriends, lovers and wives too.

We must learn to respect each other regardless of our life histories, gender identity and sexual orientation. If you are in love with a trans woman, go for it, stop worrying about what people might think or say. Life is already too short, why deprive yourself of happiness because of what people around you might or might not say? We are in 2019, not 1920! BE FREE! BE HAPPY!

LABELS ARE FOR BOXES, NOT HUMANS!