The changes to GRCs will have literally no effect on your life. 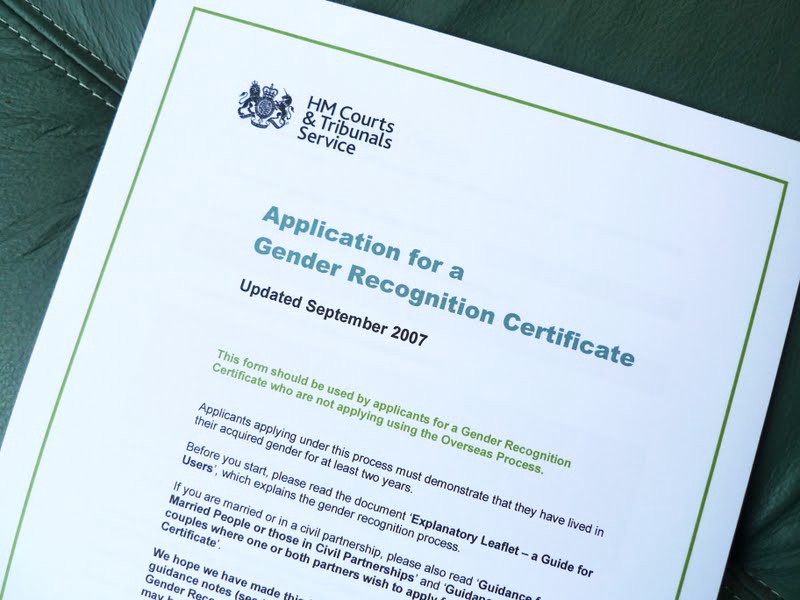 “I can’t do it,” she said, line crackling slightly. I could still hear her voice break. “It’s too horrible.”

This is the only conversation I had with my wife before our wedding in which she cried, despite the thousands of stressors and disagreements over tiny things like flower arrangements and bridesmaid dresses. And it is still, to this date nearly 5 years on, the only conversation we’ve ever had about her attempt to get a Gender Recognition Certificate.

All she wanted was for our marriage to be considered a gay marriage, not a straight one. By this point she’d been living as a woman for 3 years, and was on HRT. She had a diagnosis of gender dysphoria and a doctor’s letter to the same effect. Her passport, driving license and medical records all indicated that she was a woman. If it weren’t for the marriage certificate, there would be nothing that described her as the wrong thing, that made reference to the fact that her body had not always matched her overtly feminine, defiantly woman self.

As far as the legal requirements went, she was a perfect candidate for a GRC. But there was much beyond the legal requirements that no one had ever talked about. Justifying whether or not you’d had surgery, when you planned to have surgery, why on earth you hadn’t had it yet if you thought you deserved to be recognised as a “real” woman. What kind of sex you have. Is it with women? Is it penetrative? Because of course, that would rule you out, if you were using your genitalia in a way that the government didn’t think coincided with your gender identity. How long have you lived as a woman? Can you prove it? Where’s your evidence? No evidence, no GRC. Can you provide two (expensive) detailed reports, from two separate clinicians? Stop right there if you can’t. Go no further. Provide a “statutory declaration”. Get it witnessed by someone with a “reputable” profession. Outline every discomfort you’ve ever had about your gender. Tell us when you first bought knickers. Why didn’t you change your gender on your passport right there and then? Why did you wait until you were in your twenties to transition? Are you married? Then we need a declaration from your spouse too. Just to make sure your stories match up. On bad terms with your spouse about your gender? Estranged from them? Too bad. They have a veto on this. You can’t just enter them into a marriage to someone of a different gender. If you’re divorced, we want definitive proof of that divorce. Just to make sure you aren’t dragging an innocent ex into this. Oh, and pay us £140 for the privilege of being able to have your documents provide your correct information. Thanks.

The process is demeaning and humiliating, continually forcing you to relive what can often be quite traumatic memories just in order to get your papers matching. This is why, when the government announced last week that they were looking to make the process easier for trans people, I welcomed the decision — not something I take lightly with this government. However, some people were not as pleased.

From places ranging from the forums of mumsnet to the columns of newspapers, some women — let’s call them by their real name, transphobes — have spread their outrage widely, making sure everyone could hear it. “But this means a man can just say he’s a woman!”

I have some news for you, ladies: that is already the case. The Equality Act 2013 protects trans people and entitles them to use whichever bathroom, changing room, name or clothing they like, and have it respected. No doctors, hormones or surgeries required. We are already in your safe spaces, your private zones, your “women only” clubs. Trans people are everywhere, and you cannot tell whether someone is trans or not just by looking at them.

If he so wanted, a man could put on a dress and try and enter a woman’s changing room right now. The Gender Recognition Act won’t change that or make it more acceptable. But WHY? I ask you, why would a man expose himself to that? Trans people are spat at in the streets, yelled at from cars, beaten regularly, murdered across the globe, just because someone else didn’t like the way they presented themselves. Do you think a man would willingly expose himself to that all to get a peek of your knickers? He’d have more luck entering the changing rooms and pretending he thought it was the men’s. It’s worth noting that getting a Gender Recognition Certificate will still be a process, and probably a horrible one — one that I don’t think any man would subject himself to just for lecherous purposes.

What this is is a strawman, designed to create outrage in order to deprive trans people of an important step towards bodily autonomy. Every aspect of our lives is dictated by doctors — the changes proposed to the Gender Recognition Certificate present an important sway in the right direction, towards self-determination. Trans people are as entitled to that as anyone else.

It’s also a step towards demedicalisation — Charing Cross’s Gender Identity Clinic has recently decided it no longer should be part of a mental health trust, because it is old fashioned and offensive to consider trans people mentally ill. In many ways, transgenderism is a physical condition, creating physical discomfort in the shape of dysphoria, and requiring physical treatment such as hormone doses and surgeries. However, none of these interventions are necessary in order to be trans. There is no singular trans experience, documenting a straight line from one gender to another and crossing into medicine on the way. You are trans because you say you are, and although that might seem unpleasant or even unforgiveable to some, those are the facts. Removing the medical criteria for a Gender Recognition Certificate is a huge, important step for recognising what transness is or isn’t.

At the end of the day, most people manage fine without a Gender Recognition Certificate. It affects approximately three things. One, marriage certificates. Two, the birth certificates of your children, and your own birth certificate, and three, the age at which you retire. But the stark reminder of a life beforehand, of when everything was wrong, can be jarring and upsetting to trans people. It can make them feel worthless, devoid of meaning, trapped in the wrong body and identity. What these changes will mean is an end to that, and I for one welcome it as soon as possible.

As for you, how many people’s birth certificates or marriage certificates do you actually look at? Unless you’re a registrar, I would say it isn’t many. The changes to GRCs will have literally no effect on your life. Why do you care what it says on our birth certificates? Unless you have an issue with trans people being who they are, you should be joining us in celebrating this small — but crucial — step forward in the rights of trans people in the UK. 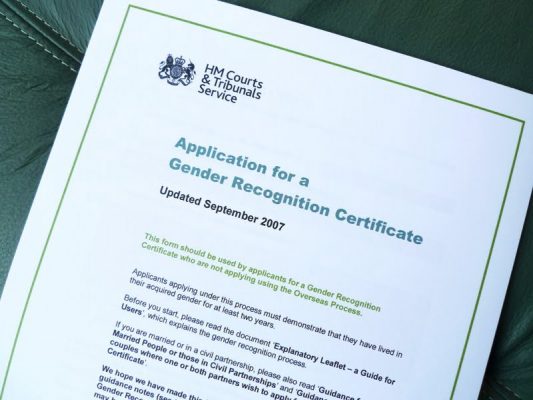