Women-only facilities will be protected

Proposals for people to self-identify their gender could be abandoned 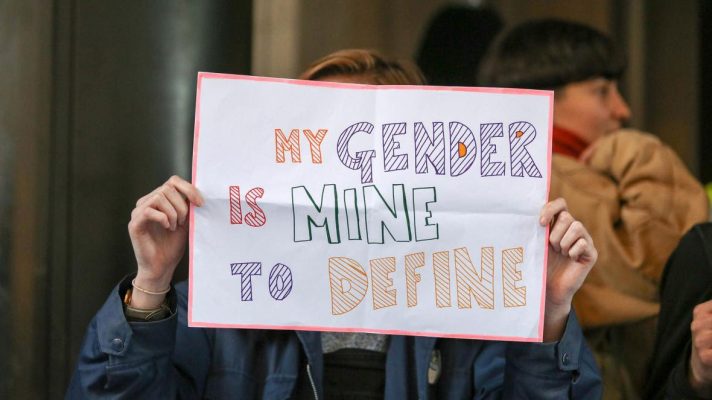 Plans to allow people to change their legal gender and “self-identify” as a different sex have been scrapped in a move that will fuel the culture war gripping Britain.

Ministers and Boris Johnson’s team in No 10 have ditched plans developed under Theresa May’s government to allow transgender people to change their birth certificates without a medical diagnosis.

Instead they plan to announce a ban on “gay-cure” therapies in an attempt to placate LGBT people. New protections will be offered to safeguard female-only spaces, including refuges and public lavatories, to stop them being used by those with male anatomy.

A paper on the government’s plans is “basically ready” and is pencilled in for publication at the end of July before MPs go on their summer break.

Liz Truss, the equalities minister, will publish the details in an official response to a public consultation on the Gender Recognition Act. That has been in the long grass since October 2018 amid controversy about the measures.

Under the leaked plans:
● Proposals for people to self-identify their gender will be abandoned and those wanting to change their birth certificate will still need medical approval. At present that means two doctors have to sign off a gender change
● There will be a crackdown on “quack” doctors to ensure that only reputable medics can give approvals
● Safeguards will be put in place to protect “safe spaces” for women, reaffirming provisions in the Equalities Act
● New national guidelines on lavatory provision are likely to be introduced, replacing the “free-for-all” in which councils set their own rules, which has seen a rise in gender-neutral lavatories
● A ban on “gay-cure” therapies that are run by some church groups and therapists will be announced on the same day.

Truss has joined forces with Johnson’s team to ensure the document is more in line with public opinion. Polls suggest voters are sympathetic to trans rights but do not support transgender women with male anatomy accessing female-only facilities such as prisons and changing rooms.

Sources say Johnson’s aides came close to announcing the change during the general election campaign and again before the coronavirus struck.

More than 100,000 responses were received to the consultation. Insiders say about 70% of those backed the idea that anyone should be able to declare that they are a woman or a man. However, officials believe the results were skewed by an avalanche of responses generated by trans rights groups.

The move will be a challenge for Sir Keir Starmer, the Labour leader, whose party is deeply divided on the issue.

In the leadership contest he was the only candidate not to sign a pledge drawn up by the Labour Campaign for Trans Rights which branded feminists “transphobic” and said the party should “fight against” them. Starmer signed a less contentious list of pledges by LGBT Labour, but that included a commitment to “introduce a self-declaration process” for transgender people.

Under current rules those wanting to change their gender pay £140 and apply to a panel for a gender recognition certificate. They have to produce two medical reports that they have suffered from gender dysphoria — usually from their GP and one other registered medical practitioner or psychologist.

Applicants are also required to show that they have lived in their chosen gender identity for two years and intend to do so for the rest of their lives. The procedure is condemned by trans-rights campaigners as dehumanising, bureaucratic and expensive.

But the new proposals are likely to be supported by feminist groups, who argue that trans rights infringe women’s rights. A source said: “At the moment local authorities are the ones who designate toilet use by gender. The government’s response is going to be to centralised.

“In terms of changing what is on your birth certificate, you will still have to have proper medical approval. And you’re not going to be able to march in and find a hippie quack doctor who is willing to say you’re a woman. That’s not going to happen. The original draft was not what people had in mind so it has been rewritten.”

The source added: “There will be big moves on safe spaces and women-only toilets and a total ban on all ‘gay-cure’ therapies.”

Truss has already strengthened advice on medical procedures for under-18s which have irreversible effects on their fertility. “She’s made it more difficult for people to get that treatment easily,” the source said. “It has to go through much greater sign-off.”

Legislation is likely to be introduced later this year or early next year but ministers expect a fight with Labour and some senior Tory backbenchers such as Maria Miller, a former minister for women, who backs self-identification.

No 10 declined to comment but a government source did not dispute the leak: “The report is not yet finalised and the prime minister will have the final say on the recommendations.”

Labour have criticised the government for abruptly ditching self-identification plans, saying they should tread more carefully in an “extremely sensitive” area.

The trans rights issue has divided the opposition, with disputes on the nature of transphobia overshadowing its leadership election, and Sir Keir Starmer has sought to take the heat out of the issue.

Ben Bradshaw, a senior Labour backbencher, this morning accused Mr Johnson of attempting to “weaponise the transgender issue to pour more fuel on the culture wars fire”, saying he was “despicable” for doing so with far-right violence on the streets of London.

Nick Thomas-Symonds, the shadow home secretary, was more circumspect, but said that “trans rights are human rights” and “we need to listen very carefully going forward in what is an extremely sensitive area.”

He told Sky News’s Sophy Ridge on Sunday: “I’m not sure the government just scrapping plans and then leaking it out in a newspaper is the way to deal with this, I think you need a much better way going forward that’s sensitive, that seeks consensus and respects everybody’s rights.”