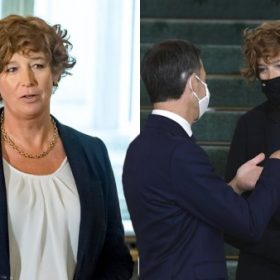 Belgium has appointed its first openly transgender deputy prime minister making her the highest-ranking trans politician in Europe.  Petra De Sutter, a Green member, was sworn in on October 4 as one of Belgium’s seven deputy prime ministers in the country’s new coalition government of liberals, greens, socialists and Christian democrats under the new prime minister Alexander De Croo.  De Sutter tweeted: ‘I am proud that in Belgium and in most of the EU your gender identity does not define you as a person and is a non-issue ‘I hope that my appointment as minister and deputy PM can trigger the debate in countries where this is not yet the case. #fighttransphobia’

As deputy prime minister she will also act as minister of civil service acting in charge of public administration and public enterprises.  De Sutter, who is also a gynaecologist and a former professor of reproductive medicine, made history in 2014 when, although she was unsuccessful, she ran in the European Parliament election.  In the same year, she became the first openly transgender MP and won a seat as MEP last year.

Green colleague Anna Cavazzini retweeted De Sutter and said: ‘What a historic moment. I am so happy and proud.’ Advocacy director of LGBTQ+ right group ILGA-Europe, Katrin Hugendubel, said the European Parliament would miss one of their ‘strongest partners’ but are ‘heartened to know such a committed equality and social justice champion will have a key role in the Belgium government’ adding that she ‘truly admires’ De Sutter’s ‘expertise, authenticity, style and commitment’.  According to the 2017 book A Path to Diversity: LGBTQ Participation in the Working World, German Christian Schenk was technically the first transgender member of parliament but had not yet come as transgender.  He made his official legal transition in 2006 after leaving parliament where he served as an MP between 1990 and 2002. Get in touch with our news team by emailing us at webnews@metro.co.uk.