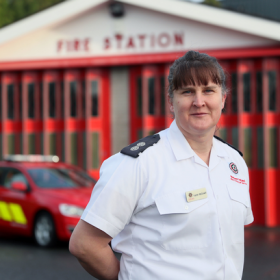 Karen McDowell, a station commander, from Dromore in Co Down, said she has been “shocked and very humbled” by the honour.

She was made MBE for her services to the Northern Ireland Fire and Rescue Service and to the LGBTQ community.

Mrs McDowell, who is married with two children, said: “I thought the email was a joke as I didn’t think you got those things through an email.

“I was shocked and very humbled.

“It was definitely a surprise.

“It’s not something I had ever thought of.”

Mrs McDowell has worked in the fire service for more than 27 years and is based at the learning and development centre.